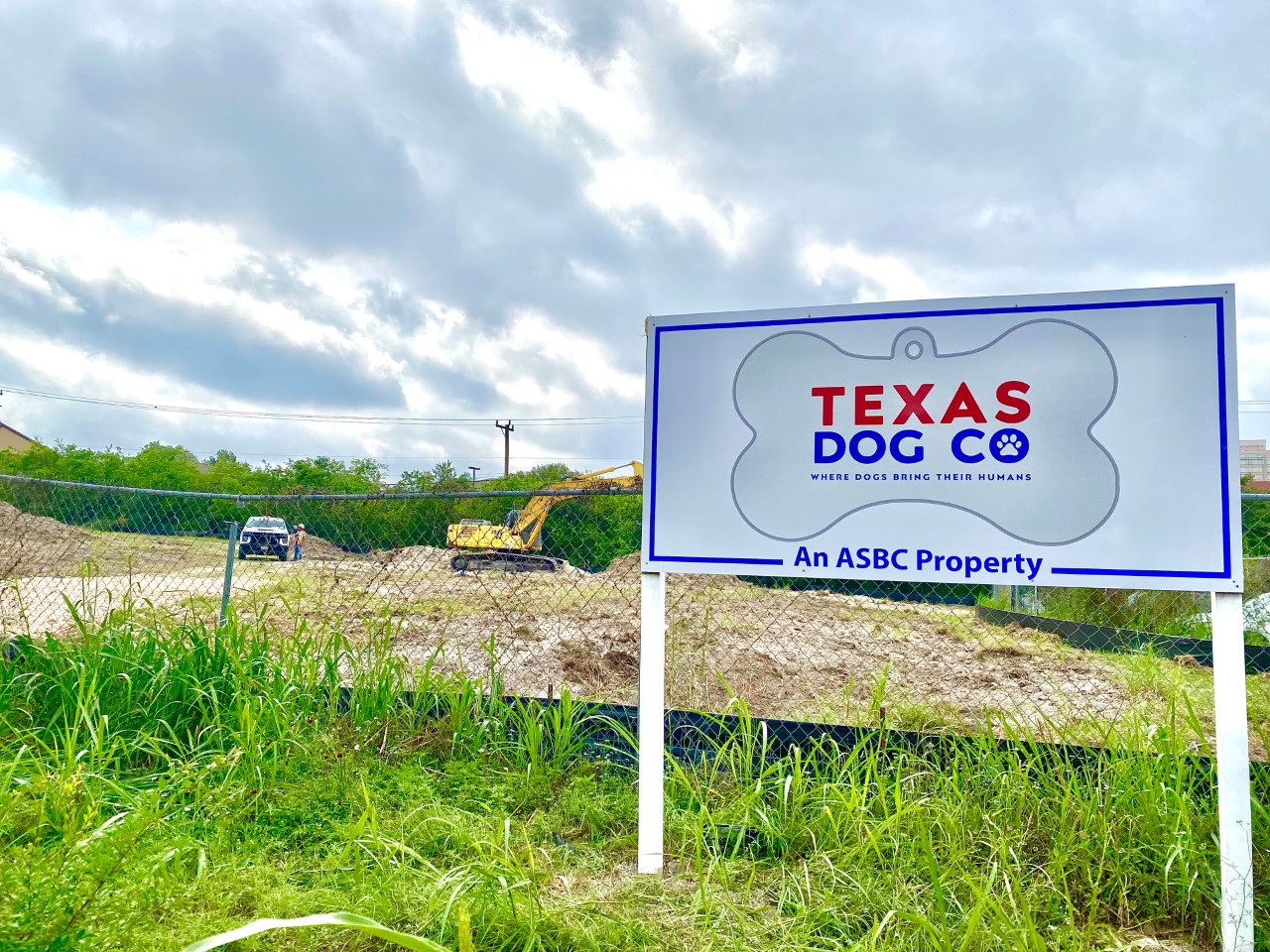 Flanked by family, friends, fellow bar owners, and a tiny pup in an equally small construction vest, Bar America owner Brian Correa hosted a groundbreaking ceremony for his upcoming concept, Texas Dog Co. & Beer Garden, on Tuesday, May 10. Correa and Bar America general manager Kristina Nava have been working closely on the new business since before the COVID-19 pandemic.

Once lockdowns and outdoor options became a norm, they ramped up their search to find an outdoor venue where there idea for a dog-focused business could have room to grow. They now own a patch of land at 4302 Hyatt Place Drive, bookended by The County Line and a Hyatt hotel, that will become the new beer garden.

A new sign with the slogan “where dogs brings their humans” marks the future home of the business. Construction is projected to take six months.

Ziga Architecture Studio, a San Antonio firm, will help the bar owners bring the 24,532-square-foot Texas Dog Co. & Beer Garden to the USAA area. Correa says his new concept will have to large dog runs, volleyball courts, and plenty of room for families and friends to play.

“I’m just excited to finally allow people to get up and get out,” Correa says. “It’s one big play area. You’ve got the volleyball courts, a big playground, people are going to be able to run around and that’s what I look forward to seeing.”

Correa took over Bar America from his maternal grandfather Martin Ramirez in 2014. The beloved San Antonio bar opened in 1942 and predates the trendy Southtown neighborhood growing around it.

“It really is a significant moment in my family’s business history, which stretches back 130 years,” Correa previously told MySA. “Constructing a new business structure on a raw piece of land is a first for either side of my family. It fell on my watch and hopefully I do not let them down.”

While Correa and Nava’s new concept has a long history behind it, Texas Dog Co. & Beer Garden will offer a completely different vibe than Bar America’s. While the San Antonio staple is known for raspa drinks and cumbia circles around the hardwood, Texas Dog Co. & Beer Garden will be more “tone down,” Correa says. The emphasis will be on dog parents and actual parents, he jokes.

“You come out here to have a good time, have fun and be in the sun,” he adds.


This is a carousel. Use Next and Previous buttons to navigate