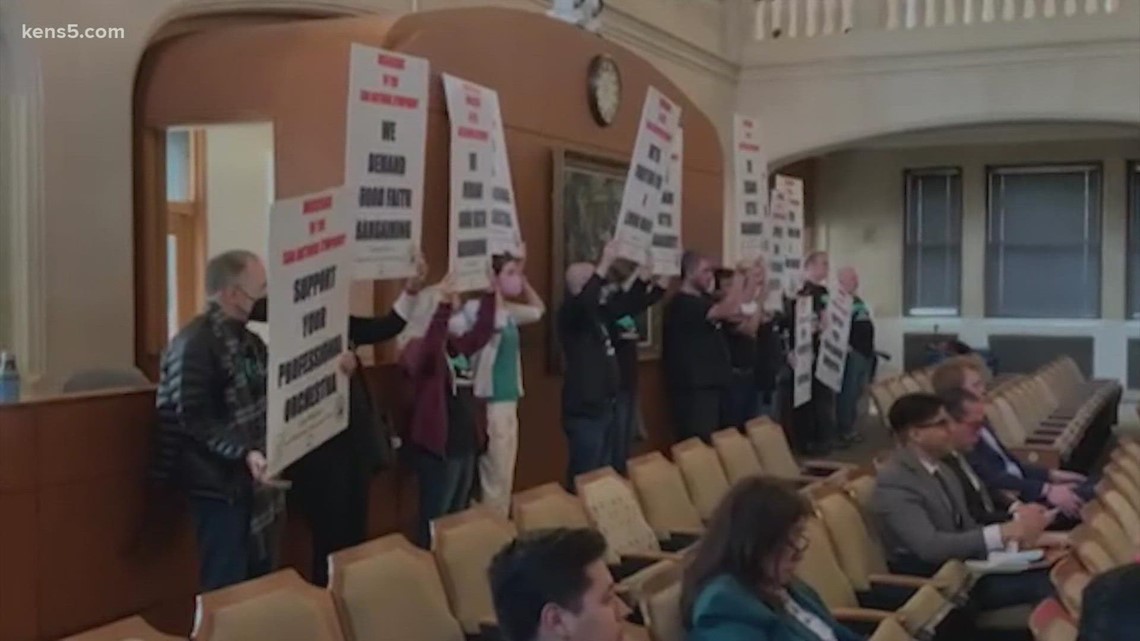 This week also saw the cancellation of the rest of the Symphony’s official season.

SAN ANTONIO – Thursday night is the first of two performances by the Musicians of the San Antonio Symphony led by Sebastian Lang-Lessing after his firing by Symphony management.

The Symphony Society had fired the music director emeritus for agreeing to the performances with the striking musicians.

“My name is Sebastian Lang Lessing. I’m the Music Director Emeritus of the San Antonio Symphony,” said Sebastian Lang-Lessing, almost defiantly using the title of the position he was fired from. “How can you fire somebody from an honorary title,” he said. “It just does not work that way.”

The San Antonio Symphony Society, which manages the orchestra, severed its relationship with the conductor after they say he broke his contract by agreeing to do shows with the Musicians Union while they are on strike.

He’s in town to conduct those performances Thursday and Friday night at 7:30 pm at the First Baptist Church Of San Antonio, but he says he’d rather be doing an official show at the Tobin center.

“We should have been here, for this week, we are not for obvious reasons,” he said. “The musicians are on strike. And we can not go on stage as the San Antonio Symphony.”

He says they are dedicating the show to Ukraine, featuring Ukrainian composers, performers, as well as Beethoven’s seventh, which he says has deep connections to the themes of war and peace.

“It’s all about freedom of liberation or end of war of peace and new beginning,” Lang-Lessing said. That brought him back to what he calls “the war at home” over the future of the San Antonio Symphony.

“Which is a war we are fighting,” he said. “And let’s not forget: 1939 is the date the San Antonio Symphony was founded. So, symbolism at its best.”

He says the ongoing labor conflict is damaging the brand of the San Antonio Symphony. He is not shy about laying blame for that damage on the symphony society saying, “It’s a sabotage actually, of the goodwill of the musicians to keep everything alive.”

This week the Symphony Society canceled the remainder of the 2021-2022 season after the Union’s negotiating committee stopped participating in the negotiations with a federal mediator.

In a statement announcing the cancellation, Symphony Society Executive Director Corey Cowart said: “The board of directors is committed to living out the mission of the symphony with the vision of sustainability, stopping the cycle that has plagued the symphony for decades.”

The Symphony Society provided KENS 5 with this additional statement:

“Responsibility to move beyond the current situation and bring live orchestra music back to the community belongs to both sides of the negotiation table. We agree that no one is served when one party walks away unilaterally from negotiations as the Union Negotiating Committee has done. This decision by the Union Committee was made on the heels of our most recent proposal, an offer developed after diligently working with federal mediators who worked with both sides.Over the last year of our negotiations the Symphony Society has made 12 different offers, including binding arbitration , to the Musicians’ Union to try and come to an agreement. The facts are clear. We can not continue the challenging financial pattern of the last 30-plus years of not being able to live within our means. We must recover, stabilize, sustain , and grow. The Symphony Society remains at the negotiation table with the Federal mediators and urges the Union Negotiating Committee to return. “

Union Negotiating Committee Chair Mary Ellen Goree said they saw no point in continuing to participate in negotiations while the Symphony Society remains committed to what she called an artificially low budget number of $ 4.7 to $ 5 million.

“It’s important to keep in mind, that we actually still have a contract. We ratified, both sides ratified a CBA, collective bargaining agreement, in August of 2019,” Goree said, “Everything the Symphony society has put forward represents a pretty significant concession from that contract. “

“The musician’s have counter-proposed some concessions of our own, but we can not drop to the level of this fictitious $ 4.7 million or $ 5 million budget limit because that will destroy the orchestra,” she said.