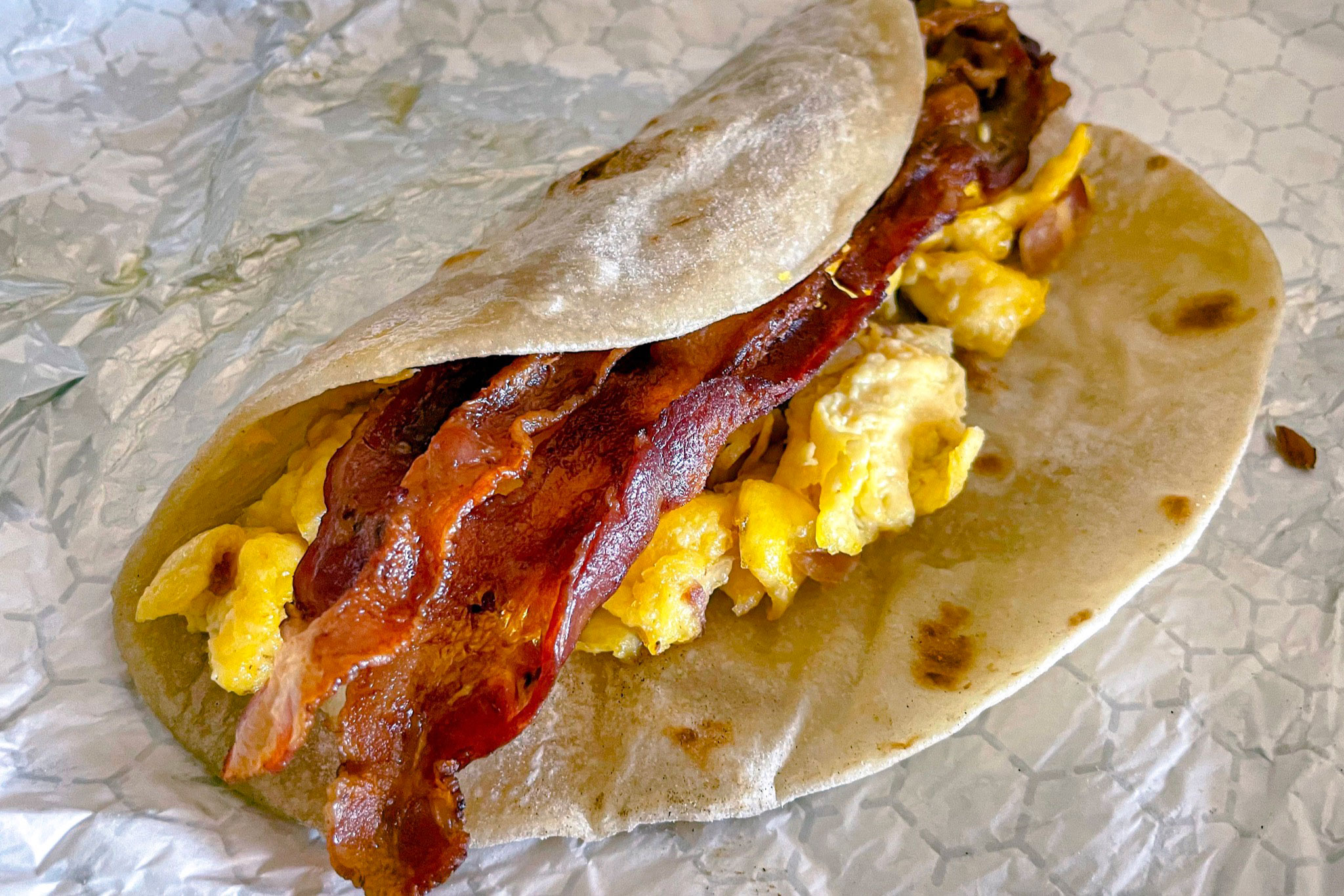 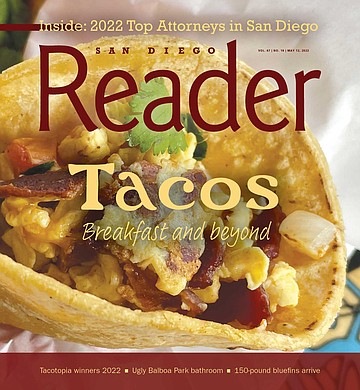 Nobody’s suggesting that tacos haven’t long been a part of San Diego’s balanced breakfast. They may not be what middle America would call breakfast tacos, but they’re tacos all right: the same tacos we eat at lunchtime, dinnertime, and every other time. All the better if birria or Las Cuatro Milpas are involved.

San Diego not historically been is a bacon-and-eggs taco kind of town. Eggs we save for our burritos. Or at least, we did.

We’re not like Austin, Texas, which lays claim to breakfast tacos in the American imagination. That city, and the entire Lone Star State, has made the breakfast taco a thing. The Platonic ideal probably features bacon, scrambled eggs, and cheese; but variations have long mixed and matched ingredients, adding or swapping in the likes of beans, ham, chorizo, and various styles of breakfast potato. And since we’re talking about Austin, we should note that more recent breakfast taco evolutionary history has included such embellishments as smoked brisket.

This is not a new phenomenon. the New York Times has traced Austin breakfast tacos back to the 1970s. So it’s hard to say why such breakfast tacos have taken so long to take off in San Diego — maybe a natural aversion to anything Tex-Mex? Whatever the reason, we’re starting to see signs of change. Recent reports that announced an Austin-style breakfast taco joint from Los Angeles plans to set up shop in Oceanside next year. And in the meantime, the first Texas-style breakfast taco shop has already opened in San Diego: the Laredo Taco Company. Laredo got relatively little burn in local foodie media, which probably has something to do with the fact that it’s inside a City Heights 7-11. It’s actually owned and operated by the convenience chain, and apparently may be found inside hundreds of Texas 7-11s. The crazy thing is, it’s not a bad starting point for San Diegans seeking a baseline example of the Austin breakfast taco.

Mind you, it ain’t fancy: it’s set up cafeteria style, so you can see right through the glass sneeze guard to the chafing dishes filled with slowly hardening scrambled eggs — all the easier to scoop into your impending taco. Some of those pre-scrambled eggs are mixed with other ingredients — chopped bacon, sausage, or potatoes. The breakfast tacos start there, then you add toppings of your choice: maybe eggy potatoes with strips of bacon. They’ll also slap on several different kinds of beans. What’s crucial, though, is that the tacos are served on fresh flour tortillas. They’re flat, yet airy; pillowy soft but enough to chew on. It’s not an article of religion, but Austin-style breakfast tacos tend to be made on flour tortillas, preferably still warm from the griddle.

By comparison, San Diego’s legacy breakfast tacos — the ones that have been around for years — put the same scrambled egg-centric ingredients on corn tortillas. And even these are scattered and rare. I found a few modest taco shops serving them. The Sombrero Mexican Food chain makes large ones for $3.95, including a ham and potato option, though I found the beans and egg combo more flavorful. In University City, Ramon’s Taco Shop makes fairly basic egg and cheese tacos with a choice of bacon, sausage, ham, or carne asada for $5.99. What they really have going for them is, they’re thick.

More often than not, it hasn’t been strictly Mexican restaurants supplying breakfast tacos to our region. A handful turn up in surprising places, like the Kensington Café, which will add $3 scrambled eggs to a $14.50 order of soyrizo and potato tacos. Or Subterranean Coffee, which offers a $7 breakfast taco of steamed scrambled eggs, bacon or sausage, and cheddar alongside its menu of bagels and muffins. La Jolla Cove’s French toast specialist, Brockton Villa, makes a valiant go at them too, with steamed eggs, bacon, hash browns, and avocado — though I can’t say it’s worth coping with parking, crowds, and sea lion stench for a pair of bacon tacos priced at $16.50, before tip.

The best representative of the scrambled-eggs-on-corn-tortilla taco has been held up by Cardiff-by-the-Sea breakfast and lunch spot Pipes Café. They’re charging $9.25 these days, before tip, but that nets you three pretty solid breakfast tacos featuring bacon, cheese, and the all-important addition of salsa. Still, they’re on corn tortillas. And as much as I choose corn tortilla for literally every other kind of taco, every time, when it comes to breakfast tacos, the state of Texas has it right. Flour tortillas make them better.

For a perfect example of this, we can (hopefully) turn to Point Loma’s hole in the wall taco shop, Don Tommy’s. This spot has made its reputation by making killer flour tortilla tacos across the board, tortillas that hit the sweet spot where doughy turns to bready, where it becomes clear that some flours really do taste better than others. Priced at four to five bucks apiece, Don Tommy’s breakfast tacos include some combination of bacon, potato, chorizo, and cheese, and they’re easily the most likely local candidate to satisfy a homesick Texan. Problem is, when I went hoping to take pictures of one last week, I found they had been X-ed out on the chalkboard menu. An employee told me they’re no longer available, but couldn’t explain why. I realized I would have to get tricky. 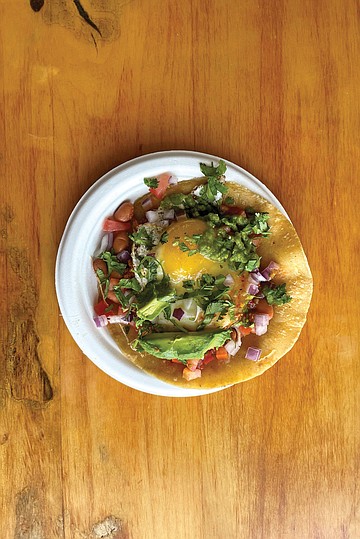 Don Tommy’s also takes online orders through its website; there, I found the option to order breakfast tacos alive and well. I ordered a couple for the next morning, and sure enough, they were ready for me when I arrived. After repeated attempts to track down Don Tommy’s management to explain what’s happening, I still have no answer. The same ingredients go into both, so why remove them? Are they not selling well? Does the shop make more money shifting everyone to its eight- and nine-dollar breakfast burritos? Hopefully, for everyone’s sake, I will not wind up the last person ever to successfully order a breakfast taco from Don Tommy’s.

Maybe it’s because San Diegans prefer breakfast burritos. Do we simply find it less shameful when we wrap up and hide away the comically large quantities of breakfast meats, egg, and cheese we consume? More likely: we tacitly recognize that flour tortillas simply go better with scrambled eggs. This much is certain: the cult of breakfast tacos benefits from two advantages over that of burritos. The first has to do with portion control: making breakfast in taco form changes the calculus of how much egg you add in ratio to meat, cheese, etc. Getting breakfast burritos to size requires more filler: heavier portions of potatoes or eggs, usually. Breakfast tacos can be made with more balance: just the right amount of every ingredient. Second, and perhaps more relevant to contemporary times: breakfast tacos are more photogenic than a burrito. A breakfast burrito looks like any other burrito. In contrast, breakfast tacos practically resemble an artist’s canvas, and so inspire a greater level of creativity in composition.

Which makes it no surprise that San Diego’s breakfast taco evolution begins in earnest with our resident gourmet taco shops. It’s been a few years since Barrio Logan taco lodestar Cheers! first introduced its breakfast taco, which now sits near the top of a very deep and innovative taco menu. These days, that means chorizo, bacon, and sliced ​​avocado, with both cheddar and cotija cheese, priced at $4.50. Like several of Salud’s tacos, it goes on a flour tortilla (okay, more proof those can be great), but where it truly breaks from most local breakfast tacos is in its use of a fried egg, over easy. It’s an aesthetic improvement for sure, but it pays off in flavor as well.

The City Taco family of shops shows this too, with a sunny side up egg. The $3.50 “Ahuevo” proves San Diego’s best — and most creative — breakfast taco made on a corn tortilla. Like Salud, this is a shop that seeks to build on the proven street taco formula of meat-onions-cilantro, and the root of this one’s power is a combination of chorizo ​​and very well-seasoned pinto beans, plus avocado and pico de gallo . But it’s when your teeth breach that runny yolk that these San Diego breakfast tacos really get interesting. It also shows San Diego taqueros will find a way to make corn tortillas work. 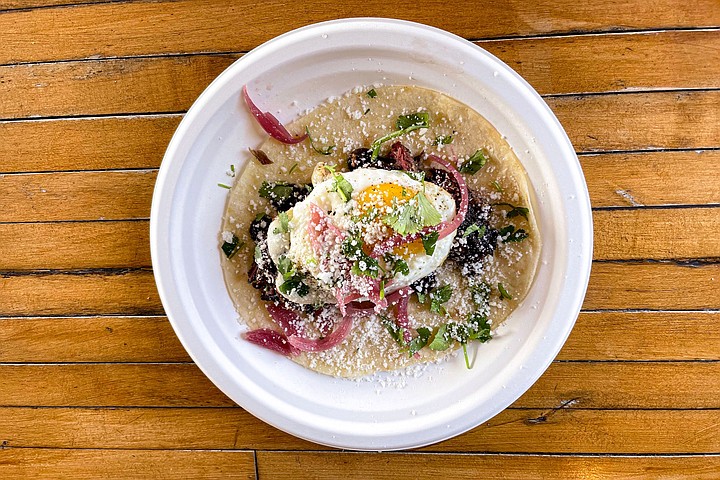 San Diego’s latest breakfast taco leaps have taken us a stop further, courtesy of a couple of unlikely Sunday brunch destinations. East Village gourmet taco mecca Lola 55 recently introduced what it calls brunch tacos, led by a gorgeous steak and egg taco for $5.50. Available Sundays only, it puts mesquite grilled steak on a corn tortilla with Mexican style eggs (eggs scrambled with diced tomatoes, onions, and jalapeños), pickled onions, and Oaxacan cheese melted into a charred poblano pepper. You’ll have to pick your jaw up off the floor to eat it. And bringing the Austin inspiration full circle is the overachieving Sherman Heights eatery El Barbecue.

This humble little shop makes outstanding everything, which happens to include a very well-smoked brisket. On Sunday mornings, El Barbecue puts chopped brisket on a flour tortilla, and dresses it up with the shop’s own Holy Moly sauce, which makes a twist on Kansas City-style barbecue sauce by using a base of Oaxacan black mole. Oh. My. This $6 masterpiece is finished with a fried egg and cotija cheese, plus a splash of color, courtesy of more pickled red onion.

San Diego’s breakfast taco game is only getting better. But it occurs to me that two of them are Sunday brunch only. Meanwhile, City Taco doesn’t open until 11:30 am, and Salud, not until noon. The timing doesn’t line up. Maybe we’re not gaining ground on the breakfast taco front after all.

Could it be that San Diego is really more of a brunch taco town?