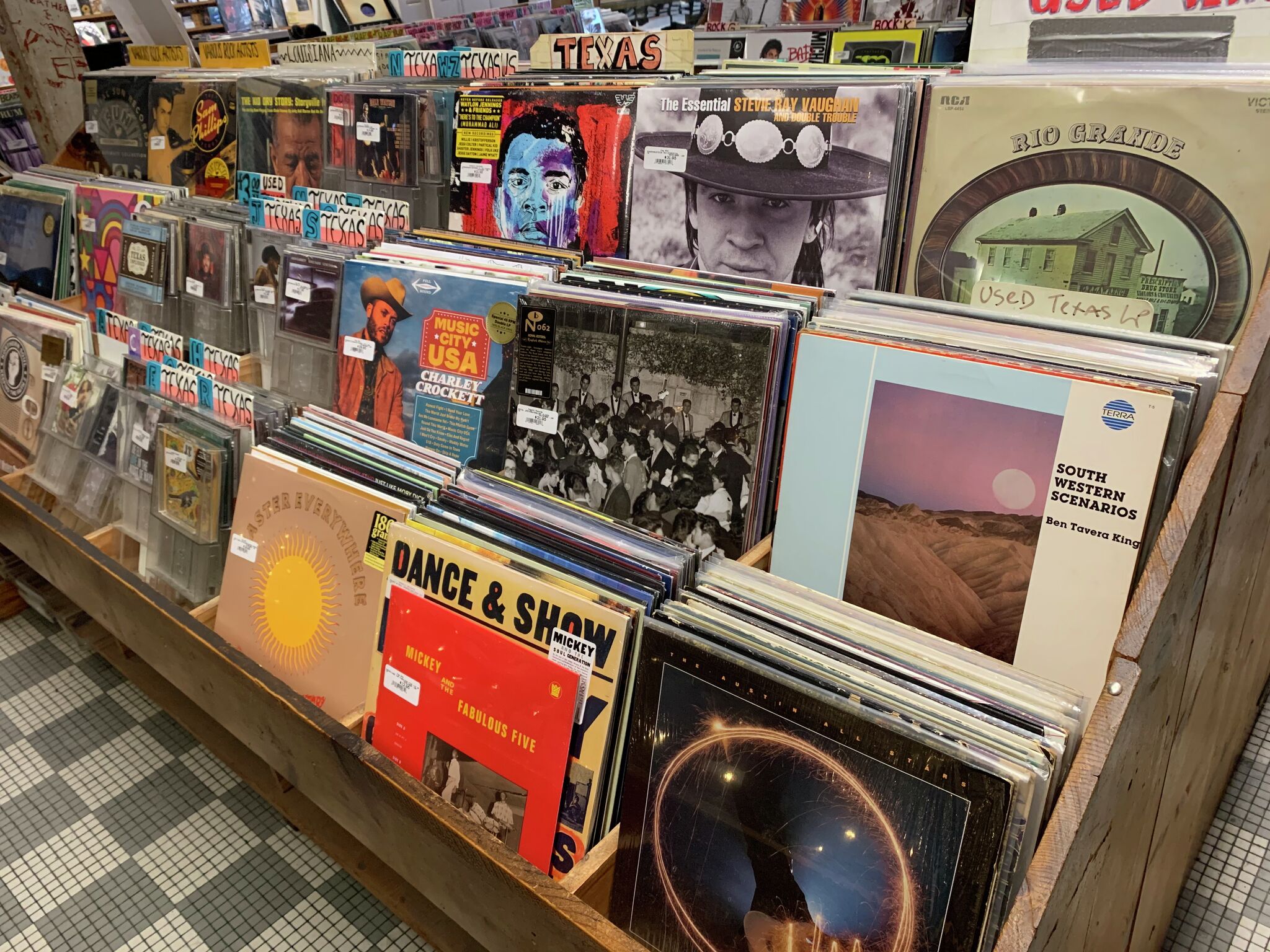 This year, Hogwild Records, the old-school record store off Main Street and Dewey, quietly celebrated its 40th anniversary on March 1. It is one of the oldest standing records stores in San Antonio, and a lot can happen in four decades. The shop has weathered the heavy metal and punk scenes of the early 1980’s, a high-profile court case, the transition to CD’s and MP3’s, a global pandemic, and the hipster-era record store Renaissance (which has since invited vinyl back into the mainstream).

Miraculously, the inky purple building near San Antonio College is still going strong. Looking for an album or band T-shirt? Allow the grimacing hog logo to be your north star.

With the help of friends, 20-something-year-old Dave Risher first opened the store in 1982. A music enthusiast, Risher has seen the shop through every thinkable transition and still oversees operations today.

This is a carousel. Use Next and Previous buttons to navigate

Longtime manager Steven Alejandro has been clocking in at the record store on-and-off since the 1980s. At 17, he joined the team a few years after the store’s opening. Risher and the other staff members, who were heavily involved in the local music scene, took Alejandro under their wings. Soon after, Alejandro began going to local shows. This includes Dead Kennedy’s defunct Villa Fontana and a Black Flag gig at a former amateur wrestling hangout on Blanco Street.

Try to find it now and you’ll only encounter an antique store, he tells me on a cloudy Thursday morning at the shop.

We talk about the San Antonio music scene, how it’s changing with the new outcrop of high-dollar venues and how it’s historically different than Austin’s. Alejandro affectionately touches on San Antonio’s working class spirit as a defining difference. This is not only a possible explanation for the city having a smaller scene than its neighbor to the north, “nobody has money to go to shows three nights a week,” he theorizes, but also why certain musical genres caught fire locally over the years .

Hogwild has always sold records from a variety of genres. All through the ’70s and the shop’s early days, punk rock and heavy metal were huge. At that time, the city sort of had a reputation for being the “Heavy Metal Capital of the World” due to the genre’s wild local popularity. This is canonically attributed to KMAC DJ Joe Anthony’s heavy radio play of Canadian metal bands.

Across the store hangs a poster of acclaimed San Antonio-based Conjunto musician Santiago Jimenez playing his signature squeeze box. The yellowing paper and younger face tells me it was printed in the late ’90s at least. I remark how surprising it is that the now 80-year-old Jimenez still seems to be booked and busy, playing shows seemingly every weekend. Internally, I recall a time he kindly bought me a beer at one of his shows.

The same could be said of Hogwild itself, enduring multiple different shifts in the ways we consume music. Risher has navigated this by knowing when to expand inventory to collectors items and merchandise, Alejandro shares. In its 40-year tenure, the most precarious times for the shop was 2008 (in the post CD MP3 heyday right before the vinyl revival) and in 1990, when Risher was arrested.

The record vendor was and sent to court for insisting on selling the notoriously explicit album As Nasty as They Wanna Be by Florida rap group The 2 Live Crew. The album got swept up as a scapegoat during a particularly puritanical political wave happening across the country at the time.

“It became a rallying cry for the conservative Christian right,” Alejandro says. “There were efforts to ban the album nationwide really, but particularly in the south.”

Under pressure, many chose to sign the document, but Risher refused on the grounds that the album was not technically illegal. was then arrested for selling “obscene material.” While it did not land him in jail, it did lead to a year-long court experience.

In true punk spirit, Alejandro, Hogwild employees, and other members of the local arts community at the time rallied behind Risher, in fear that he would end up behind bars and the shop would have to close. They staged an anti-censorship protest on City Hall and the opposition began making headlines in local news. Suddenly everyone wanted a copy of the album, so Risher ordered a 100 more.

“It was like, oh, you’re gonna arrest me for selling this? Okay, let me see how many copies of this I can sell,” Alejandro says.

Ultimately, Risher shook off the charges, and Hogwild forged on.

Two years after the start of the COVID-19 pandemic and fresh off a successful Record Store Day, Hogwild, mindful of the health of staff and patrons, still enforces mask wearing in the shop. Through online sales and pickups, lock down was manageable, and not as devastating as it was to other local businesses.

Looking around, you get the sense that it has not changed much over the years despite how much the world has changed around it (though Main Street has not changed all that much, Alejandro tells me). There’s still neon band posters, hand-drawn fliers made by someone in search of a bass player, and of course, jackets of warm vinyl.

Maybe you do not care about records – perhaps music is not something you pay that much attention to – but records themselves are significant. If you’re still not sold, the saying “the medium is the message” by Canadian Communication Theorist Marshall McLuhan can help us understand why. Essentially, the idea is that the way media is packaged (in this case music in vinyl) has a more interesting cultural impact than the media itself (which we’ve learned is plenty interesting).

Arguably, this is true of vinyl records, which were the first readily accessible and mass produced forms of tangible music. Their introduction into the mainstream made music something people could possess. As a result, the bands you liked became increasingly entwined with your identity, something that was yours. The records you stored at home became signifiers of who you are to the rest of the world. Investing in them was a commitment.

From the punk scene to rock and roll, could certain counter cultural movements have sprouted if records and tapes did not exist? I do not think so. Hogwild is an essential part of this global story on a local level.

For years, local record stores were essential cultural watering holes, and in some ways they still are. When it comes to the future of the store, Alejandro takes it day by day, and trusts Risher’s adaptive abilities.

“Right now things are fine, people are buying records,” Alejandro says. “I’d like to think I mean, we’ve been here for 40 years, and music is definitely not a fad. Is the format that it comes on a fad? Will vinyl go away again?”