Santiago Jiménez Jr. has drawn worldwide accolades for sticking to the traditional conjunto sound pioneered by his father. He appears this Saturday at Taco Fest.

Beyond being a music legend, Santiago Jiménez Jr. is one of San Antonio’s chief cultural ambassadors. He’s a keeper of the conjunto flame, an irrepressible raconteur, a legendary beer drinker and a living reminder of our city’s vibrant culture.

He’s also full of contradictions – a devoted family man on his eighth marriage, a music traditionalist who’s versed in all forms of electronic media and an unwitting DIY icon.

Born into a conjunto royal family, master accordionist Jiménez seized on the independent music ethos long before it became hip, putting out his own releases so he could make the music he wanted, trends be damned. For him, there was no choice.

“Music is my life,” he told the Current during a recent interview at his West Side home. “I’ve been playing for 60 years already!”

A visit to Jiménez’s home studio reveals the staggering depth of his achievements. He won the National Endowment for the Arts’ Master Artist designation and received the Presidential Medal of Arts from President Barack Obama. He also got three Grammy nominations, university commendations and the keys to multiple cities.

As could be expected, the residence is also stacked full of CDs, LPs, cassettes, 8-tracks and even releases in the discontinued Sony MiniDisc format. Santiago makes his own MiniDiscs, complete with mini artwork.

Ask the experts and they’ll tell you much about Jiménez’s recognition and legacy stems from his willingness to stay true to his roots. Some conjunto performers dabble with the latest styles and crazes to chase fame, while others mixed the form with outside influences.

But Jiménez has made a career of upholding the traditional style he learned from his late father, Don Santiago Jiménez Sr., one of the genre’s progenitors.

From Jimmy to Santiago

Over numerous cold beers in that West Side home, the younger Jiménez patiently recounted his life’s musical journey.

Don Santiago Sr. was a leader in melding the ranchera songs of Northern Mexico with accordion and a danceable German polka beat, the essential combination behind the conjunto genre. His pioneering use of the tolulocheor upright bass, can be heard on essential early recordings released through Decca, RCA, Mercury, Imperial, Clove and other labels.

One of the elder Jiménez’s recordings, “La Piedrera Polka,” was written in honor of the Brackenridge Park rock quarry that employed his family.

The family later moved further west to Castroville Road, where his father’s music would ring through the household. However, the patriarch did not force music on his children, who also included Flaco Jiménez, a conjunto legend in his own right.

“My father would not teach us,” Santiago Jiménez Jr. said. “He wanted us to teach him that we could do it. And we did. Even Flaco did it himself. ”

Early on, Jimenez went by the name Jimmy. He was later bestowed with the name Santiago through his accordion prowess. The “junior” appendage was meant to indicate a stylistic mastery akin to his father.

“Who was the king? I do not know, ”Jimenez said, laughing.

Like most musicians, Santiago worked odd jobs between gigs to make ends meet. That included time as a cook.

“But I was only burning beans,” Jiménez told the University of Texas’ Reporting Texas project in 2017. “The main thing in my life has been music.”

The early years also included stints in Houston and Fort Worth. Along the way, several marriages ended with a common deal breaker.

“You know what breaks up my marriages?” Jiménez asked. “My wives, they kept telling me I need to stop the music.”

Along the way, he also recorded the infectious “El Corrido de Henry Cisneros,” honoring the political up-and-comer. Jiménez even penned the tune before Cisneros’ mayoral run and his appearance on the national political stage.

While releasing records, Jiménez gigged constantly. He played everywhere, but perhaps most notably at the legendary Lerma’s Nite Club on Zarzamora St., one of the longest-running conjunto music venues in Central and South Texas. 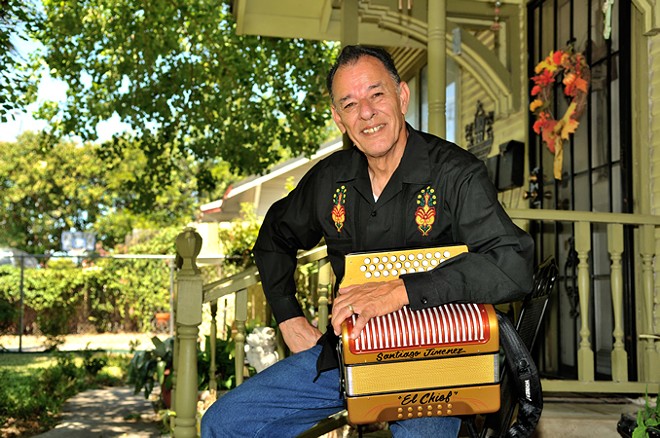 Jiménez photographed outside his home in 2000.

However, it was not until after he’d been playing South Texas for years that Jiménez began bringing his old-school conjunto flavor to adoring audiences worldwide.

“During the ’70s, I did the whole map of the United States,” he said. “I flew though. Very rarely would I drive. ”

Among his European travels was a memorable gig in the Soviet Union.

“It was arranged for me. See, I used to play at Tycoon Flats, and folks would come from all over the world. Met these guys from Holland. They arranged it, ”he explained. “It was a bit scary. Peroat that time, I went to represent United States conjunto music as an ambassador. ”

The Soviet venue was a cavernous steel factory: “No mics, no nada. It was crazy sounding. I did not like it. They were not friendly. ”

Nonetheless, the hard traveling helped Jiménez establish his music on a global scale.

Eventually, he came back home to open the El Chief record shop, recording studio and office space. He inhabited the space, monikered after his “El Chief” nickname, from 1990 until 2000.

In a way, that homecoming brings the story full circle. Jiménez’s Still Kickin ‘ was recorded at Joe Trevino’s Blue Cat Studios in Southtown, not far from El Chief’s one-time storefront.

Beyond its release on Dayton’s label, the album displays Jimenez’s lasting influence on a new generation of musicians.

“We recorded all the instruments and the main vocal live in one room,” Capps said of the session. “There were overdubs for the vocal harmonies, which are Santiago. The band would cut each song in one take, then Santiago would stay in the room and do the harmonies. The whole album took about three hours to make. ”

The stripped-down approach paid off. Still Kickin ‘ bursts with joy and immediacy. That vitality was not lost on Americana star Dayton, who sings the album’s praises on his label’s website.

“[Jiménez is] the living link between Norteño and Tejano music that influenced rock ‘n’ roll and country and modern Latin music, ”Dayton wrote. “So, when Garrett said he had this raw and powerful old school-style recording he did with Santiago, I jumped at the chance to put it out. This project is a labor of love. Our No. 1 goal is to turn more people onto one of the last living legends from San Antonio! ”

Jiménez takes his living-legend status in stride. He’s hopeful the new album will win him a fourth Grammy nomination, but either way, he’s going to stick to his real-deal approach to the music he grew up with.

After all, it brought him this far.

Get our top picks for the best events in San Antonio every Thursday morning. Sign up for our Events Newsletter.