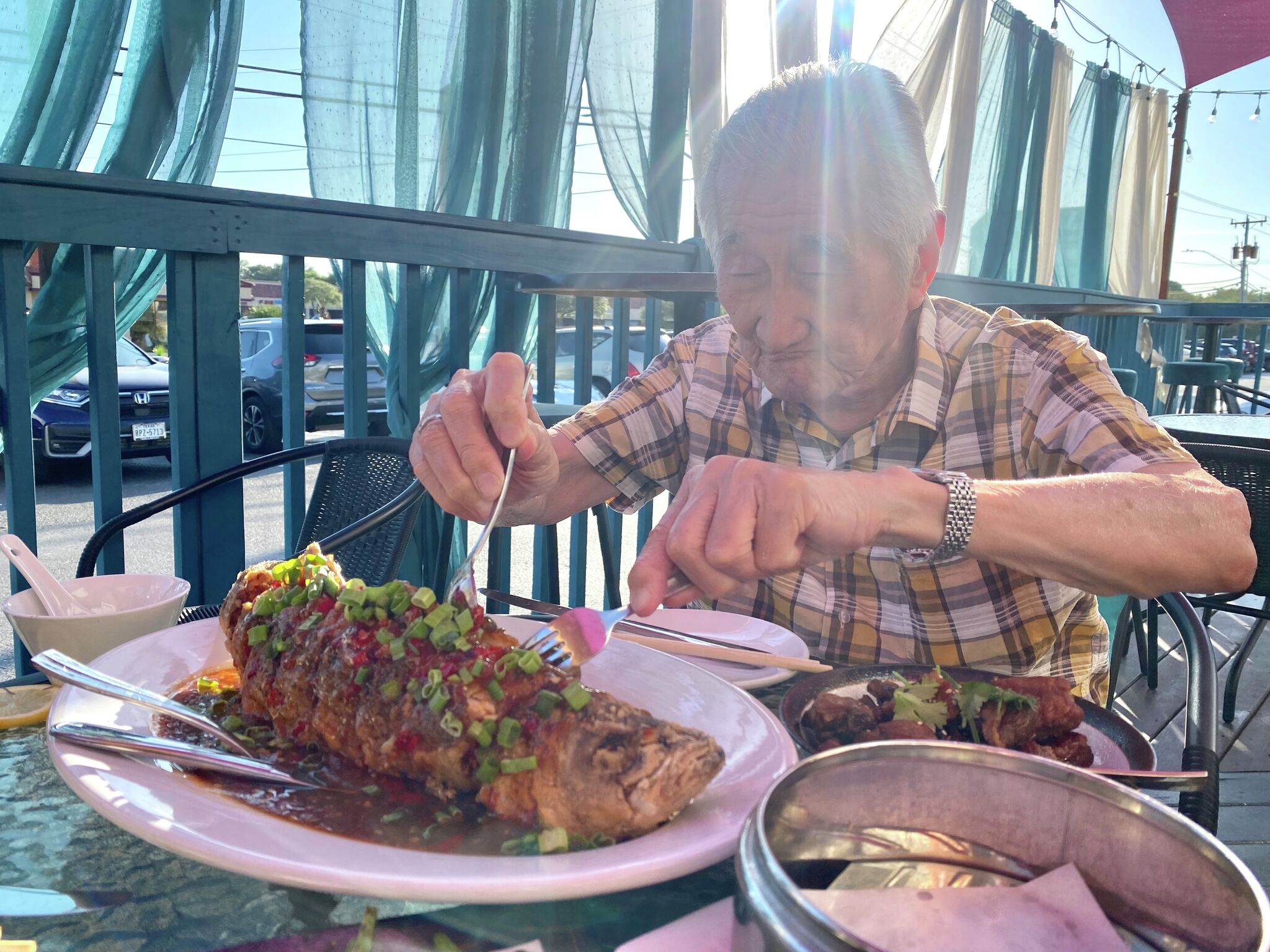 Unbeknownst to Ruthie Wu’s dad, Manuel Dy, he’s reached San Antonio social media stardom. The 93-year-old with kind eyes and a healthy appetite is a new San Antonio resident who has quickly become a foodie favorite. He probably hits the town more than you do, too.

Ruthie decided to bring her father, who was living in Manila, to live with her and her husband, David, in February after her mother died in December 2021. Prior to becoming her father’s caretaker, Ruthie launched social media pages dedicated to her exploration of the city’s food scene. She’s also a Yelp Elite member. Manuel’s debut on her pages started organically, in the most Texas way possible: A photo at Buc-ee’s. He’s now tried mangonadas, crispy taco plates, and chicken-on-a-stick.

Ruthie has become a sort of social media liaison for her budding star of a father. Manuel owns a Facebook account, but does not use it. She says his account was solely created to chat with family through Facebook Portal, a video-calling device, but he’s not posting and does not realize that he’s a local favorite. The contagious enjoyment he shows in his photos isn’t a staged influencer shot, he just really loves his food.

“He’s been a foodie before ‘foodie’ became a word, Dad’s always loved trying new things,” Ruthie says. “He was an original.”

The party of three sometimes eats out every day of the week for dinner. The food changes. Some days it’s El Mirasol and other days it’s Freddy’s, but the visits are always marked by an adorable photo of her sweet dad with his plate then posted on her Facebook and Instagram accounts.

“I know some people are like ‘Do you even cook?'” She jokes. “Every time we go out, we’ve got to get a picture of Dad with the food.”

The photo is just one component of the outing game plan for the family. Restaurants with outdoor seating are a must as a pandemic precaution. As we enjoyed our meal, a few flies decided to also partake. After a few minutes of swatting the insects, David disappeared for a few moments before returning with a portable table fan that they keep in the car for these kinds of situations. They are true professionals.

Ruthie also has a calendar of must-eats. For example, DaShi is a must on Thursdays because the banquet-style whole fish is Manuel’s favorite. I was admittedly hesitant to dig into the fish, with the head and bulging eyes staring at me, but David carved out a small bite. It was soaked in a red sauce that Ruthie says makes it a family favorite.

I had to ask: What does the new San Antonian love to eat? Ruthie, who translates for Manuel, says Toroko Sushi, Piranha Izakaya, and anywhere with churros are standouts for her dad.

It was a hot San Antonio afternoon as we gathered around the family-style feast, but most of the warmth was felt as Ruthie, David, and Manuel passed around the food and introduced me to soup dumplings and shared some of their culture with me. Ruthie unfolded her San Antonio AAPI Heritage Month Restaurant Passport, which was already half marked up and was about to get a stamp from DaShi. She says she’s proud of the way San Antonio is embracing the celebration of AAPI culture.

Though conversation between Manuel and I is limited, the feel is familial as he urges me to share some of his spicy pork ribs. I prefer chicken over pork, but I could not refuse his offer.

I’m not the only one doting over him. As I post photos of our dinner online, my friends on Instagram are quick to respond, saying how much they love Ruthie’s posts and adore him.

“People have responded ‘He’s our dad now,'” Ruthie says with a laugh.

Another says: “As usual, you make everything look so good! And Dad with his smile always makes me smile too.”

She says she’s tickled by the responses, but the posts have a deeper meaning. After losing her mother unexpectedly in December, she’s cherishing as much time as she can with her father. Ruthie says she’s received messages from strangers who share that seeing the family’s adventure online has motivated them to also give their elderly parents a call and pick them up for a meal.

“I did not imagine losing my mom,” she adds. “You never realize that. So now I know that I’ll always have the Facebook memories of when we go to places.”