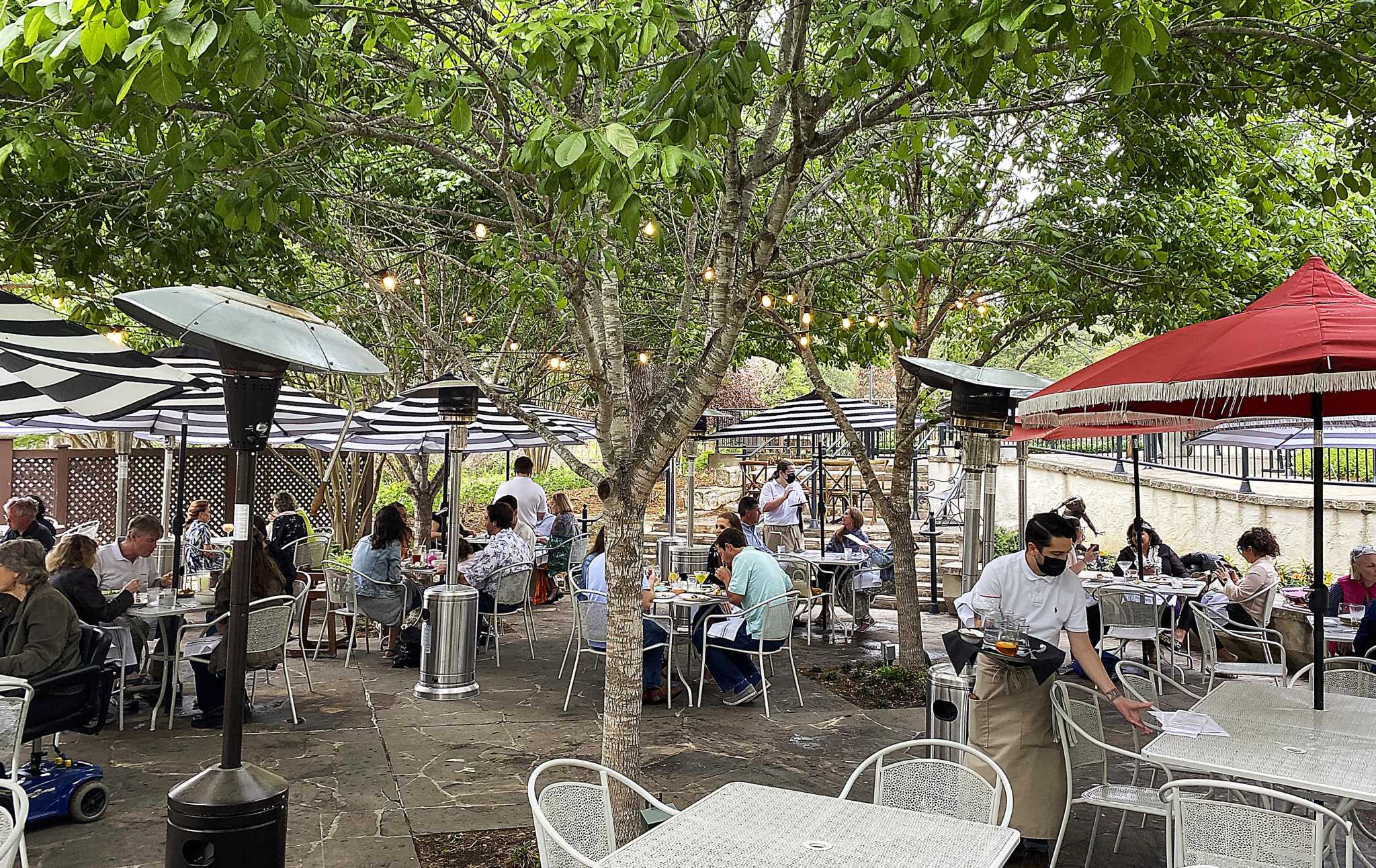 This spring has brought record-high temperatures to San Antonio, a scorching climactic occurrence that, in years past, would have sent restaurant customers scurrying indoors into the icy embrace of air conditioning. But so far, restaurateurs across the city are finding their patio seating in far higher demand than ever.

Before the pandemic, patios were seen as a nice bonus option that might draw some business for a few months out of the year. But when there were strict occupancy limits for indoor dining rooms and customers were feeling more comfortable eating outdoors than inside, restaurant owners added patios or started beefing up the ones they had with more tables and better cooling and heating systems.

Maybe it’s a case of if you build it, they will come, but now you can find diners parked at an outdoor table at nearly any date on the calendar, and owners see patio dining as a permanent, year-round part of their business.

That’s led owners to invest even more heavily in improvements for their al fresco spots, and if you’re a property owner, good luck leasing it to a restaurateur if there is some kind of outdoor space available.

Restaurateur Jason Dady owns several properties with ample outdoor seating including Two Bros. BBQ Market, Alamo BBQ Co., Tre Trattoria and Jardín. When restaurants began reopening in 2020, Dady’s patio spaces provided a lifeline to his restaurant empire. And it’s one of the reasons he was able to survive when so many other eateries shuttered for good.

“The only reason we came out ahead was because of those outdoor spaces,” Dady said. “I think we had a major advantage over people who did not have an outdoor option. It’s just that simple. ”

Dady estimated that prior to the pandemic, his indoor and outdoor clientele was skewed roughly 70 percent indoors and 30 percent out. Now, he said, the balance is much closer to 50/50, and it’s made him double down on making those outdoor spaces inviting – and profitable.

In addition to burning through more and more umbrellas and bug-repelling fans that wear out rapidly, he made several significant investments including an additional $ 15,000 worth of tables and chairs at Jardín and a new $ 40,000 covered patio at Two Bros. that will allow him to seat an additional 100 customers.

“I think this became a way of our world for the past two years, and it is not going anywhere,” he said.

National numbers support that thought. The National Restaurant Association’s 2021 State of the Restaurant Industry report indicated that since the start of the pandemic, 62 percent of fine dining and 56 percent of casual dining restaurant owners have committed more resources to expanding and developing their outdoor dining spaces, 45 percent of both casual and fine dining operators said they’ve added seating to their parking lots and sidewalks. The vast majority of operators surveyed said they plan on keeping those outdoor improvements in place.

Not all properties are created equal when it comes to patios. Jeremy Rushing, an agent with Restaurant Realty Group, said there’s a sweet spot.

“People want 1,500 to 2,000 square feet with a drive-thru and a patio. Those are getting snatched up almost before they even hit the market, ”Rushing said. “There’s not enough inventory anywhere. Austin is pretty much tapped out and San Antonio is following close behind. ”

“In San Antonio’s prime downtown areas, I can think of a handful that are available,” he said. San Antonio may be near patio saturation.

At The Hayden, which opened on Broadway near Brackenridge Park in late 2020, owner Adam Lampinstein knew he’d be busy for Mother’s Day. What he did not expect was just how many customers would choose to sit outside – even well into the afternoon when temperatures spiked to nearly 100 degrees.

“Mother’s Day was crazy busy, and we were full of reservations. We set up a bunch of extra tables assuming nobody would want to sit outside after 10 am, but they were out there all day, ”Lampinstein said. “But Texas people know it’s going to be hot, and we’re OK with it. If you live here you know what you’re getting into. ”

At the Hayden, Lampinstein’s patio has a charming view of a tree-lined courtyard shared with the nearby Press Coffee. It remains breezy thanks to the addition of several industrial-grade fans – an upgrade from cheaper fans he found burnt out too quickly. He’s made several other functional and cosmetic improvements to the space to keep customers comfortable, as well.

Lampinstein places a small, portable insect-repellent fan on each table to keep the flies and mosquitoes away. The section often has a dedicated server who keeps food and drink moving at a faster pace. And he’s invested in hand-held point-of-sale devices that prevent the time-consuming dance of waiting for the server to run inside, swipe a card and return with the bill.

Those efficiencies are matched with aesthetics. Lampinstein recently purchased string lights and lush plants to make the space even more inviting.

On a recent 95-degree afternoon, nearly every seat was packed on the side patio at the Bombay Bicycle Club on North St. Mary’s Street as the Trinity University women’s basketball team packed the space to celebrate a triumphant 28-3 season. There was still room for another 50 patrons on a back patio that owner Bill Leighton added to the property as the pandemic hit full steam in June 2020, but that space is closed for a few weeks for renovations. The new patio has been such a hit that Leighton is adding a server station and outdoor bar with a selection of draft beers.

Not bad for a converted parking lot.

“It took off pretty much immediately,” Bombay general manager Ali Barrera said. “We laid down artificial turf, which helps keep the patio cooler. We lost about seven or eight parking spaces, but it was more than a fair trade. ”

Guillermo Garza, owner of the popular Guillermo’s restaurant on McCullough downtown scooped up an Austin Street home near Government Hill before the pandemic hit with the intention of turning it into a ghost kitchen. But when he saw how COVID was driving demand for outdoor dining, he changed gears and decided to make it a second Guillermo’s location complete with a new sprawling, customer-friendly courtyard.

On ExpressNews.com: The 5 best panaderías, Mexican bakeries, on San Antonio’s South Side and downtown

“When COVID hit, I realized we can really do something with this outdoor space,” Garza said.

The tiny indoor space at the new Guillermo’s can seat about 25, but Garza can seat more than 200 customers in the courtyard, which is equipped with fans and complimentary bug spray in addition to a full second bar to keep plenty of cold beer flowing.

He said he has not had any trouble keeping customers happy, even when temperatures spike.

“These first two 100-degree days, I’m looking at the reports, and my manager said everyone still wants to sit outside,” Garza said. “Fortunately we have some really great patio spaces that regardless of where the sun’s at, you’re in the right position to feel the wind coming in from the southeast.”

The boom in outdoor dining has led to a few unexpected operational challenges. At The Hayden, Lampinstein now spends more than twice what he used to on ice. His one ice maker struggles to keep up with demand as margaritas and glasses of water sweat away outside, so he’s having to buy supplemental ice from a supplier and may soon add a second ice maker to keep up.

For restaurateur Dady, just making sure everyone has a seat has proven difficult on some days.

“The trickiest part of it is managing the reservations,” Dady said. “On a busy Saturday, we might have 200 reservations on the patio And if it rains, we do not have anywhere to seat you inside because all those tables are booked as well. It’s important to have very good communication with customers about their reservations. ”