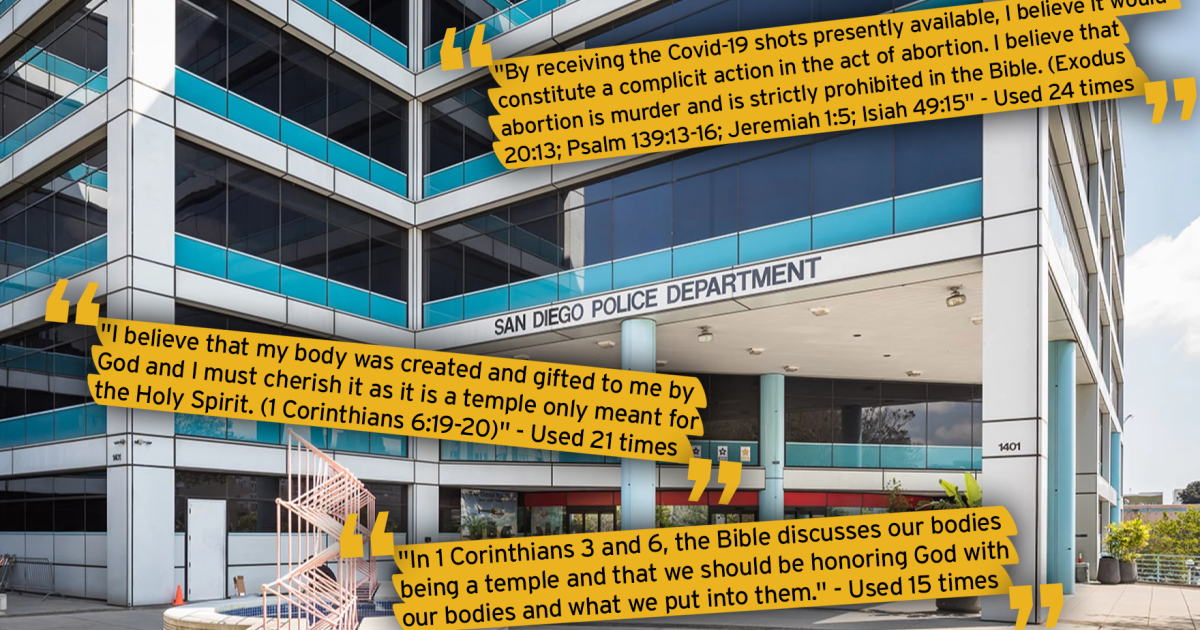 The impassioned plea from a San Diego police officer seeking a religious exemption from taking a COVID-19 vaccine was meant to focus on the officer’s deeply held beliefs.

“It is my belief that God knew what He was doing and the body of many needs no ‘fixing’ by mandkind (sic),” the officer wrote on the city’s exemption application. “‘No man can serve two masters: for either he will thate (sic) the one, and love the other; or else he will hold the one, and despise the other.’ Luke (16:13).”

That’s just one example of uncanny similarities found by a KPBS review of 105 religious exemption forms that San Diego Police Department personnel filed with the city. In fact, more often than not, the passages appeared to be copied directly from pages on the internet.

Most responses stated that the COVID-19 vaccine is in direct conflict with the Bible. “I am Christian,” another of the forms read. “I believe in Jesus Christ as my Lord and savior. I believe the Bible to be the word of God provided to all people as guidance on how to live to bring glory to God.”

That same wording is used on at least 10 separate forms.

Several responses were copied word-for-word among multiple police staff, and most of the answers were pulled from form letters posted on the internet from organizations including the Liberty Counsel and Founding Freedoms Law Center. Only eight employees had completely original answers.

Despite this, city officials have approved the bulk of requests from employees to skip COVID-19 vaccinations for medical or religious reasons. As of this week, the city has approved 955, denied 16 and has 30 outstanding.

KPBS requested copies of all of the exemption requests. The 105 reviewed for this story, all of which came from the SDPD, represented the first batch released by the city.

City staffers who reviewed the requests said language copied from the internet could still reflect someone’s personal religious beliefs, and that it’s not the city’s role to judge where the wording came from.

The city evaluated all the requests under Title VII of the Civil Rights Act and the California Fair Employment and Housing Act, which prohibit employment discrimination based on race, color, religion, sex and national origin.

To decide whether an answer truly contained religious beliefs, staff looked for it to address “fundamental and ultimate questions … such as life, purpose, death, humanity’s place in the universe,” said Julie Perez-Rasco, the director of the city’s human resources department.”(And) were part of a moral or ethical belief system as opposed to relating to a single subject.”

When the city announced it was approving most vaccination exemption requests in March, Mayor Todd Gloria said in a statement that he was proud that more than 90% of employees were vaccinated. Gloria’s spokesperson said he would not comment for this story because he was not directly involved in decisions over individual employee’s exemption requests.

The head of the San Diego Police Officers’ Association did not return repeated requests for comment.

Almost all the responses from SDPD staff reviewed by KPBS included references to specific Bible verses to justify not taking the COVID-19 vaccine. The most common verses came from 1 Corinthians.

“Don’t you know that you yourselves are God’s temple and that God’s Spirit dwells in your midst?” one passage reads. “If anyone destroys God’s temple, God will destroy that person; for God’s temple is sacred, and you together are that temple.”

The use of this and similar passages in an exemption form “stretch at the boundaries of what’s a possible application of this text,” said Kara Lyons-Pardue, a New Testament professor at Point Loma Nazarene University.

“The Greek terms that underlie this text are speaking to a ‘you plural,’ something we don’t have the modern English the equivalent to other than a ‘y’all’ or ‘you guys’ or that sort of thing,” Lyons Pardue said.

In 1 Corinthians, the apostle Paul is speaking to a group, the Corinthians, “arguing against some pretty gratuitous sexual immorality going on in the community,” Lyons-Pardue said.

“So this is about how sexual wrongdoing has a sort of polluting effect on the community as a whole,” she said. “Here it’s not even food or something that you would consume or a medicine that’s in reference, this is talking about sexual immorality.”

Lyons-Pardue, who is herself a Christian, said pulling out specific sentences or phrases from the Bible and applying them to an argument, whether anti-vaccine or otherwise, without considering the historical context of the passages is a misuse of scripture. This is called “proof texting,” she said and is unfortunately practiced across the spectrum of political ideologies and opinions, and historically was used to support slavery and the Holocaust.

“The meaning implied by isolated verses can’t be extracted and used independent of the literary context, the historical context, the overall argument of the book or section of scripture that they’re found in,” she said.

She said that considering the larger context of many of the Bible passages referenced shows the value in the Bible for protecting human life, especially “infants, children, young people, old people, people with disabilities, people who are on the fringes or margins of society, people that broader society would, in fact, look down on within that time.”

“So while these answers absolutely pulled out a trajectory in scripture that is very strong, that values ​​human existence, it struck me that those who desire to employ the vaccine mandate are valuing human life in a different way as well,” she said.

More than 75% of respondents said their religion did allow them to receive other vaccines – like tetanus shots, flu shots and childhood vaccinations — just not COVID-19 vaccines. When asked why their religion only prevented them from receiving COVID-19 vaccines, more than a dozen employees left the question blank and 20 said they didn’t know. Some said they were given vaccines as children when they had no choice.

Many others made the argument that only COVID-19 vaccines are derived from fetal cells, which is equated to abortion or murder. Among the 105 responses reviewed by KPBS, abortion was referenced 89 times; murder 23 times.

The vaccines themselves do not contain fetal tissue. Fetal cells from elective abortions done in the 1970s and 1980s were used in producing the Johnson & Johnson vaccine, but the Pfizer and Moderna vaccines are manufactured without any such cells.

Certain laboratory tests of the Pfizer and Moderna vaccines did use those fetal cell lines. However, the same cell lines are also used to test drugs like acetaminophen, ibuprofen and aspirin, as well as testing of other COVID-19 treatments. They’re also used for other vaccines, including chickenpox, rubella, and hepatitis A.

Twelve of the respondents described themselves as Catholic, and all of those 12 said they couldn’t take the vaccines because doing so equaled to supporting abortion. The Vatican and pro-life Catholic scholars have published statements saying Catholics should take COVID-19 vaccines.

‘Fail the class for plagiarism’

The fact that police officers would copy answers from the Internet to a question that was asked about deeply held personal religious beliefs was disheartening to Khalid Alexander, an English professor at San Diego City College and criminal justice reform advocate.

“If they were taking one of my classes, they would all fail the class for plagiarism,” he said. “It’s blatant and in your face.”

Alexander said the fact that the city approved the exemption requests, despite the clear evidence that they were copied and pasted, suggests to him that elected officials don’t have control over the police department.

“When this amount of law enforcement decides that they don’t need to follow the rules that everybody else needs to follow, the question is who holds the police accountable?” he said.