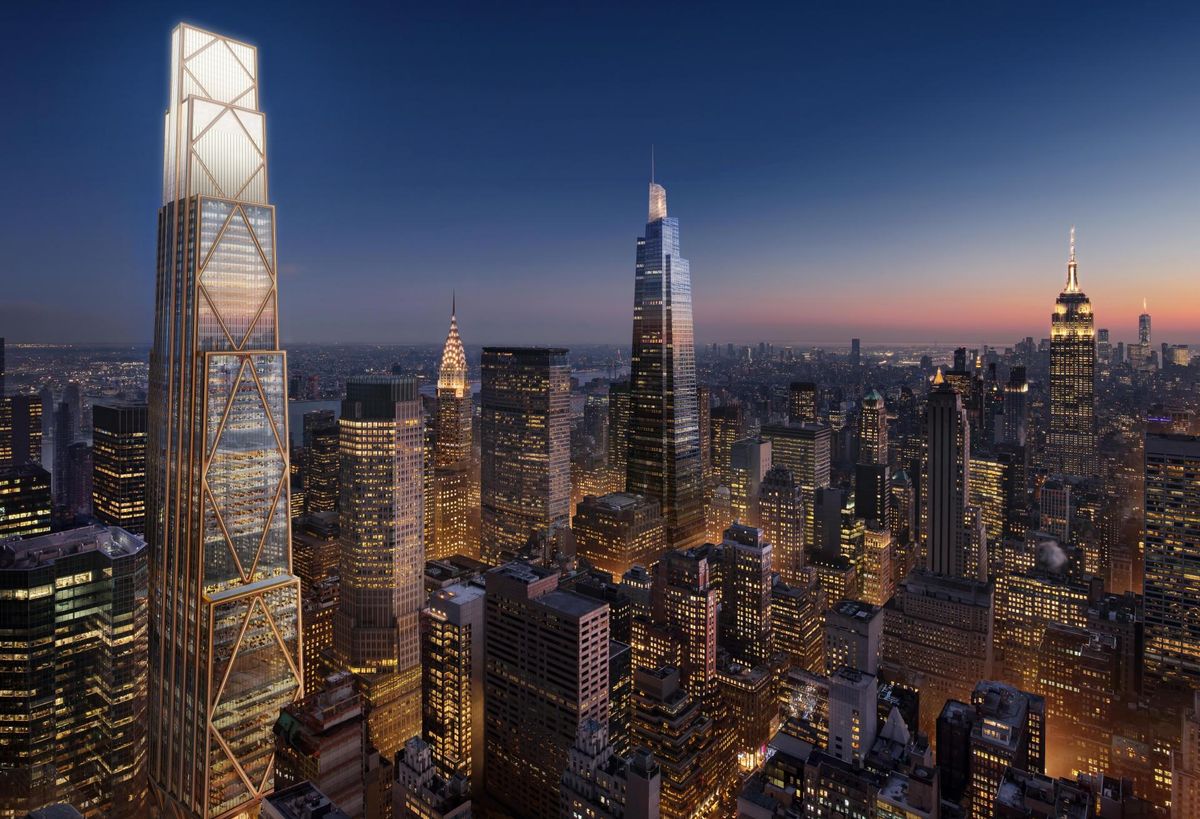 Buildings are responsible for approximately 21% of all global carbon emissions, according to the United Nations Intergovernmental Panel on Climate Change, and other facets of the built environment generate even more.

But as building owners try to cut down their emissions, some are also looking at how to get cleaner power into their properties — and finding, in many cases, that means leaving the grid entirely to meet their sustainability goals.

JPMorgan Chase’s planned global headquarters, 270 Park Ave. in Manhattan, will be one of a handful of NYC buildings powered by all renewable energy.

In New York City, buildings are the largest source of greenhouse gas emissions, currently producing roughly two-thirds of the city’s emissions. With Local Law 97, which penalizes owners who don’t slash carbon emissions, on the horizon more landlords are looking to decarbonize their buildings.

But beyond reducing power usage, the city’s building owners are keenly aware that the power they bring into their properties largely comes from burning fossil fuels. Finding renewable power sources, though, has proven difficult, pricey or impractical.

“We have meetings every other week, internally as well as with external folks, to try to figure this out,” Marx Realty President and CEO Craig Deitelzweig told bisnow. “And so far, we haven’t been able to.”

Developers of two new trophy towers have found one possible answer. Within a month of each other this spring, Brookfield Properties and JPMorgan Chase announced they would each be powering a Manhattan skyscraper entirely with renewable energy. To achieve that, they would both be taking the buildings off the grid.

A few weeks later, in mid-April, JPMorgan revealed its design for its global headquarters in NYC: a 2.5M SF, 60-story building at 270 Park Ave. that would also be powered entirely by Brookfield Renewables’ hydroelectric plants as soon as 2025.

Brookfield Properties Senior Vice President of Operations Michael Daschle told bisnow that other property owners can pursue a similar arrangement to One Manhattan West if they choose — but that many don’t know it’s even possible.

“It’s a matter of access,” Daschle said. “It’s definitely not a well-known mechanism to market.”

One Manhattan West was completed in 2019, and JPMorgan is just starting construction. For the vast majority of NYC buildings, though, it is almost impossible for landlords to ensure they are renewable-powered. Deitelzweig said he has looked at how to get renewable energy into some of Marx Realty’s buildings, but has come up short.

“You can’t really put a wind turbine, for instance, on your building,” he said. “And so it’s: How do you get that renewable energy to your space? And it just doesn’t seem like, right now, those routes are available.”

Approximately 85% of New York City’s local grid uses fossil fuels, according to estimates from the NYC Mayor’s Office of Climate and Environmental Justice. Although 88% of upstate’s grid uses renewable energy sources, predominantly through a mix of nuclear and hydroelectric power, the MOCJ says there are “insufficient” transmission lines to bring that power into the city.

Consequently, most of NYC’s more than 1 million buildings are largely powered by oil and natural gas, many via plants more than a half-century old. In 2020, almost 60% of New York’s electricity came from fossil fuels, according to Con Edison, NYC’s main electricity provider. With Edison spokesperson Philip O’Brien told bisnow that 2021 saw slightly more fossil fuels burned to power the city than 2020 after the Indian Point nuclear plant in Westchester County — accounting for 31% of NY’s energy in 2020 — was decommissioned.

Power companies are feeling the pressure to switch their fuel sources. ConEd has committed to producing 100% clean energy by 2040. Gas provider National Grid has plans to swap out its fossil fuel gas for renewable-generated hydrogen and leftover methane from landfills, farms and other facilities.

But Local Law 97 looms over the heads of many commercial building owners, and its deadlines are approaching far sooner than the power companies’ promises. By 2030, buildings larger than 25K SF must provide a 40% reduction in emissions from 2005, and in 2024, owners have to start reducing emissions to meet that goal or face ends.

Although Brookfield Asset Management owns both Brookfield Properties and Brookfield Renewables, only one piece of Brookfield’s vast New York City portfolio is powered by renewables. Brookfield is evaluating which buildings it owns that would most benefit from access to renewable power, Daschle said.

“Having the property be powered 100% by renewable electricity definitely elevates the status of that property in the market, so for our portfolio we certainly want to start with our flagships,” Daschle said. “That’s definitely one of the components. The other is the energy systems and the property. We’d want to assess how much electricity and how much steam some of the buildings use, and then the size of that purchase appropriately.”

Besides purchasing directly from a provider, buildings can also look at generating their own renewable electricity on-site. But most NYC buildings don’t have enough surface area to generate close to the amount of power they consume.

“Options to produce it on-site are very limited in the city,” Empire State Realty Trust Senior Vice President and Director of Energy, Sustainability and ESG Dana Robbins Schneider told bisnow. “A skyscraper is not a practical place to generate on-site renewables.”

EBI Consulting Energy Program Manager and Senior Energy Engineer Lucy Bass said solar will likely be a popular option for NYC buildings, as panels can sit on the roofs of the city’s many tall buildings. But a few panels will likely only generate a fraction of the power needed by the building.

“They’re still left with three-quarters of their consumption that is not renewably sourced,” Bass said. “In this scenario, which is very likely going to be pretty common, the property can then discuss some additional options with their utility provider.”

Instead of generating their own energy, most landlords are turning to the next-best option: buying Renewable Energy Credits, otherwise known as RECs. bisnow spoke to multiple NYC property owners for this article, and most said RECs were their only real option to offset the amount of fossil fuels they burn by being plugged into the grid.

Renewable energy plants sell the electricity they produce to power providers, but they also receive RECs from the federal government for every unit of renewable power generated. In addition to selling electricity, renewable plants can sell RECs to buildings.

If a building owner purchases enough RECs for an entire building, that essentially allows the owner to say the building is carbon neutral — even if the actual power going into the building still comes from fossil fuels.

The argument is that this is a win-win for renewable energy manufacturers, who make enough to ensure they stay profitable and can scale green energy production, and for building owners who get to claim they’re renewables-powered.

“We’re buying renewable energy credits, they’re just not feeding directly into our building. They’re going on to the grid in some other place,” The Durst Organization Vice President of Public Affairs Jordan Barowitz said. “Renewables are more expensive at the moment, so it’s a way to stimulate the development of renewable energy.”

But as the need to provide a building’s green credentials becomes more urgent, more building owners want to follow JPMorgan’s lead and get ahead of the curve. And with a limited amount of renewable energy on the grid and RECs available for purchase, that’s tricky.

“The driving factor here is we’re not decarbonizing New York’s economy. If 85% or 90% of the electricity in New York City is generated from natural gas, we have to displace that generation. We have to do it with renewables,” Real Estate Board of New York Senior Vice President of Policy Zach Steinberg said. “That has the benefit of creating this pool of RECs that could potentially be used for Local Law 97. They just don’t exist today.”