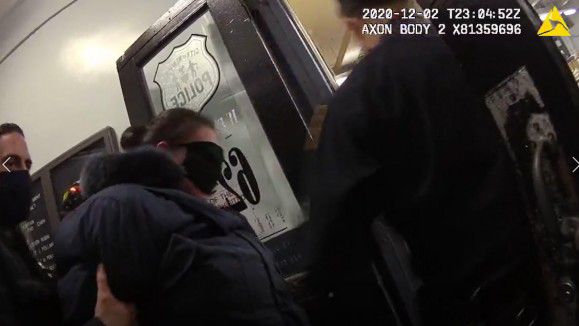 A group of NYPD officers violently arrested a woman after she came to their Brooklyn precinct to pick up a police report, a lawsuit charges — and footage provided by her attorney shows the alleged incident unfolded.

Patricia Rodney went to the 62nd Precinct in Bath Beach on Nov. 30, 2020 after her insurance company told her she needed to file a police report before it could replace a glucometer she had lost, a lawsuit she filed against the city and several NYPD officers in Manhattan federal court says.

An officer told Rodney, who has diabetes, that she could pick up a copy of the report on Dec. 2, according to the suit. When she returned to the precinct that day, however, officers there refused her request from her, the lawsuit claims.

One officer told her she would have to request a copy at the NYPD’s Manhattan headquarters, according to Hell Gate, which first reported on the lawsuit.

Frustrated, Rodney refused to leave without one, the outlet reported, at which point the officers told her their body cameras were recording her, according to the lawsuit.

When Rodney held up her phone and said she was recording them as well, they “became agitated and enraged,” the suit alleges.

“Ma’am, we’re asking you to leave, you’re not leaving, and you’re not allowed to record,” one of the officers can be heard saying in body camera footage obtained by Rodney’s attorney.

Rodney “was not actually recording,” but said so because she was “afraid that without knowing they were being recorded, they would abuse her,” the lawsuit notes.

That’s when the officers “handcuffed” [Rodney’s] wrists and shackled [her] ankles pushed [her] to the ground and began twisting [her] arms, causing [her] to cry out in pain,” the suit claims.

Rodney, who can be heard screaming in the footage, was left with a fractured elbow, according to the suit. One of the officers, meanwhile, “punitively adjusted [her] mask to cover her entire face before calmly walking away,” the suit alleges.

Police took Rodney to the hospital for treatment before bringing her back to the precinct, where they kept her for hours, the lawsuit claims.

Instead of getting a simple piece of paper, [Rodney] was brutalized, repeatedly lied to, and hospitalized,” the suit says. “It is not hard to imagine that, if [she] had not been lucky enough to have what happened to her captured by countless body cameras, the NYPD would deny the worst of the abuses she faced (including having an officer callously and casually pull her mask over her eyes for no reason at all).”

A spokesman for the city’s Law Department on Thursday told NY1 the agency was reviewing Rodney’s case. An NYPD spokesperson said the department would not comment on pending litigation.

“While the mayor spends his time imagining issues how citizens film the police, this is what real New Yorkers deal with every day: a private, lawless gang, perpetually high on power, abusing people just because they can,” Green said.