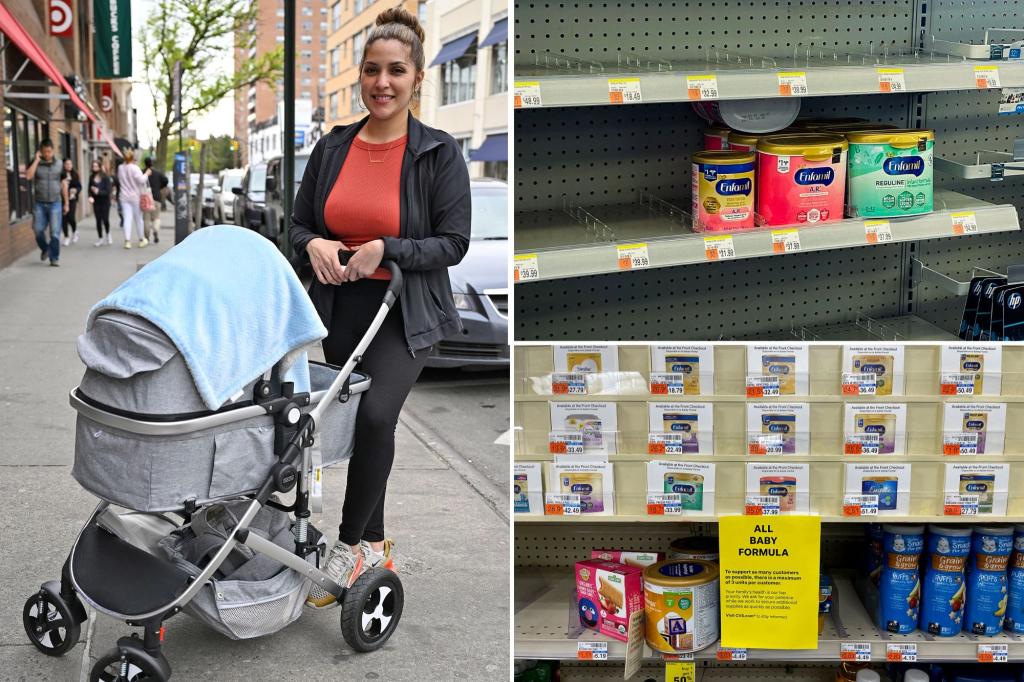 The situation is only getting more dire for new parents — nearly three months after a major baby-formula recall began causing a crippling shortage.

Forty percent of all baby-formula products nationwide are currently out of stock, according to data reported this week by CNN.

“As you see, we have nothing on the shelf,” a worker at a Walgreens in Forest Hills, Queens, told The Post On Tuesday. “We only have, like, three cans.”

Kristen Jaronski was scouring CVS in the neighborhood Tuesday for formula to feed her 5-month-old daughter, Sophia, lamenting, “You’re constantly trying to find it anywhere — online and in stores.”

She finally hit the jackpot at the CVS — four bottles.

“It’s ridiculous,” she said, holding up a bottle. “I can get one day out of this.”

The shortage largely stems from the Feb. 17 recall of the popular powder formulas of name brands Similac, Alimentum and EleCare, after there were two baby deaths and several reported illnesses linked to the products coming from a Michigan manufacturing plant run by Abbott Nutrition.

The Sturgis facility was at the center of a whistleblower report sent to the FDA in October 2021, according to Rep. Rosa DeLauro (D-Conn.), who accused the regulatory body last month of being slow to act and not examining the plant until January of this year.

Abbott Nutrition did not respond to a request for comment from The Post on Tuesday. In a statement issued last month, the firm said it was working with the FDA to restart operations in Michigan.

“We continue to make progress on corrective actions and will be implementing additional actions as we work toward addressing items related to the recent recall,” the company said at the time.

Meanwhile, Big Apple stores are struggling to keep the crucial product in stock — as parents scramble to feed their babies.

At a Kew Gardens CVS in Queens, only a total of about a dozen cans of baby formula were for sale Tuesday.

“To support as many customers as possible, there is a maximum of three units per customer,” read a sign hanging from the shelf.

“We don’t have a lot,” a worker there told The Post.

‘At the CVS in Forest Hills, manager Aris Sanchez acknowledged, “Every CVS has a shortage. It’s company-wide.”

“It’s scary because I breast-feed, but it’s not enough to feed him,” she told The Post. “What if he doesn’t have food or enough back-up, and I’m not able to produce as much?

“It’s very concerning. I’m crossing my fingers waiting for him to speed up his growth so I can start feeding him actual food.

Concern over the shortages extends beyond the city.

“I can’t believe the stress this is causing. It’s crazy,” said Jacqueline Zebrowski of West Nyack in Rockland County, whose son Jackson will be 5 months old Wednesday.

“You get to the stores, and there’s nothing on the shelves,” she said. “I went to Target recently, and there was nothing. It’s scary. I find myself going from store to store to store.”

Brian Dittmeier, senior director of public policy at the National WIC Association, which helps advocate for moms struggling to make ends meet, told The Post, “Each day that this crisis continues, parents grow more anxious and desperate to find what they need to feed their infants.

“The unprecedented scope of this infant formula recall has serious consequences for babies and new parents.”

Congresswoman Elise Stefanik (R-NY) told The Post on Tuesday that President Biden and his administration have done nothing to alleviate the shortage.

“Bare Shelves Biden’s failed policies have created a panic for families by failing to address a baby-formula shortage,” said Stefanik, herself a new mother. “Hardworking parents are already paying the price for Biden’s inflation and supply-chain crises. They can’t wait weeks for formula.”

The pol’s blistering comments came the same day she fired off a letter to the FDA demanding to know what it is doing, if anything, to try to help ease the situation.

New York City Health and Hospitals, the agency which runs the city’s public hospitals and clinics, told The Post on Tuesday that none of its facilities are experiencing a formula shortage.