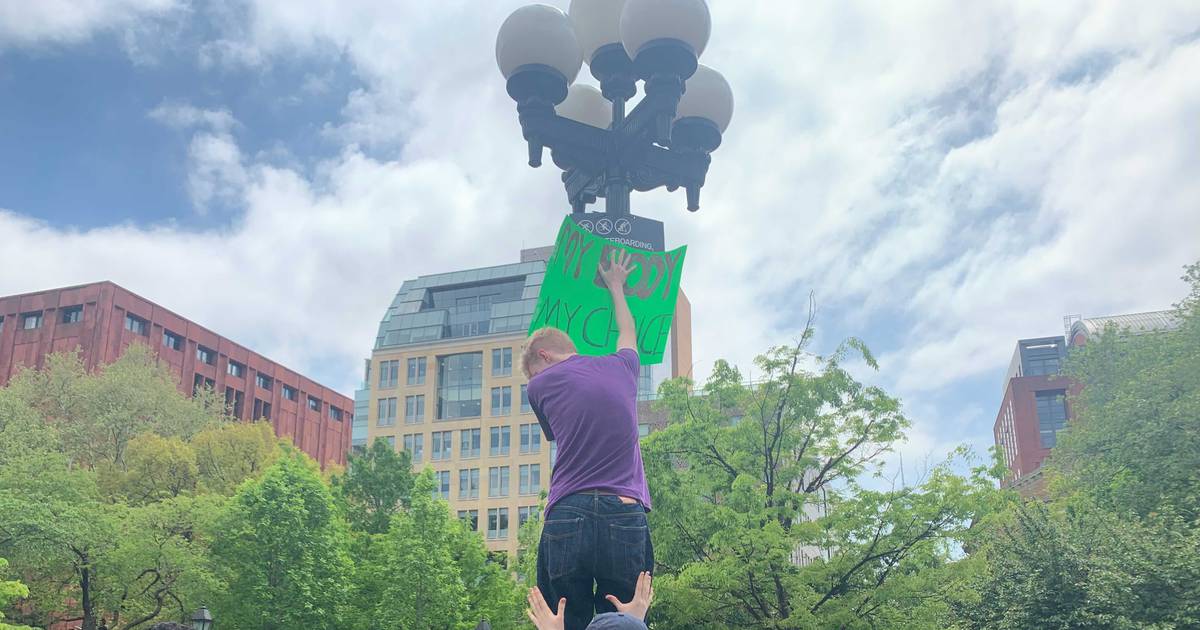 City students as young as middle schoolers heeded a social media-organized call to drop their pencils and textbooks at 11:00 am to join a pro-choice march that started in Union Square and culminated in hundreds of young people filling Washington Square Park to express their disgust.

“A lot of times class doesn’t take place in a classroom,” said a senior at LaGuardia High School named Eva, who left school early to join the rally. “LaGuardia knows that. They know what students need to flourish and infringing on our rights is not that.”

City public school students aren’t shy about stepping outside the schoolhouse doors to take a stand for social and political causes, from climate change to sexual harassment.

Most students who made it to Washington Square Park said their schools were supportive of their decisions to join the march.

“They’re marking us absent but they’re not emailing home or anything,” said Ana Hendrich, a freshman at Frank Sinatra High School for the Performing Arts in Queens. “They love that we’re using our voices.”

Nora Sipngarn, also a student at Frank Sinatra, said, “our school encourages this kind of thing.”

“We believe women should have the right to choose what they do with their body,” she added. “It’s my body.”

Protests have swelled across the city and country since a draft decision penned by justice Samuel Alito overturning the court’s seminal 1973 Roe v. Wade decision, which states prohibited from banning abortion, was leaked.

If the decision is overturned, dozens of states are poised to enact legislation making abortion illegal.

In New York, where abortion is legal under state law, Gov. Kathy Hochul has doubled down on the state’s commitment to reproductive rights, promising an additional $35 million to abortion providers.

Some kids who joined the march Thursday said it wasn’t just their schools they needed to win over, but also their parents.

Crystal Ha, a 17-year-old from Jersey City, got her mother’s blessing to skip school and join her sister, 20-year-old NYU sophomore Jessica, at the Washington Square Park rally.

“If our mother allowed me to skip class for this, you know it’s a sad moment for women,” Crystal said.

But she explained that the stakes of the Supreme Court feel monumental, even for women residing in pro-choice states like New York and New Jersey.

“It’s a slippery slope,” she said. “A third of the country is pro-choice but we’re forced to live under the rule of ancient ghouls without uteruses. It disgusts me.”

It wasn’t just high school students exercising their first amendment rights. College co-eds from nearby NYU also joined in on the activism.

Jack Williams, a 19-year-old NYU student, said he got tacit approval from his professors.

“It’s not outright endorsed but if you wanted to come out here today most faculty won’t penalize you.”

“I think a lot of them took the day for themselves too, hopefully to do something like what we are doing here,” Williams said. “They see the injustices happening too.”