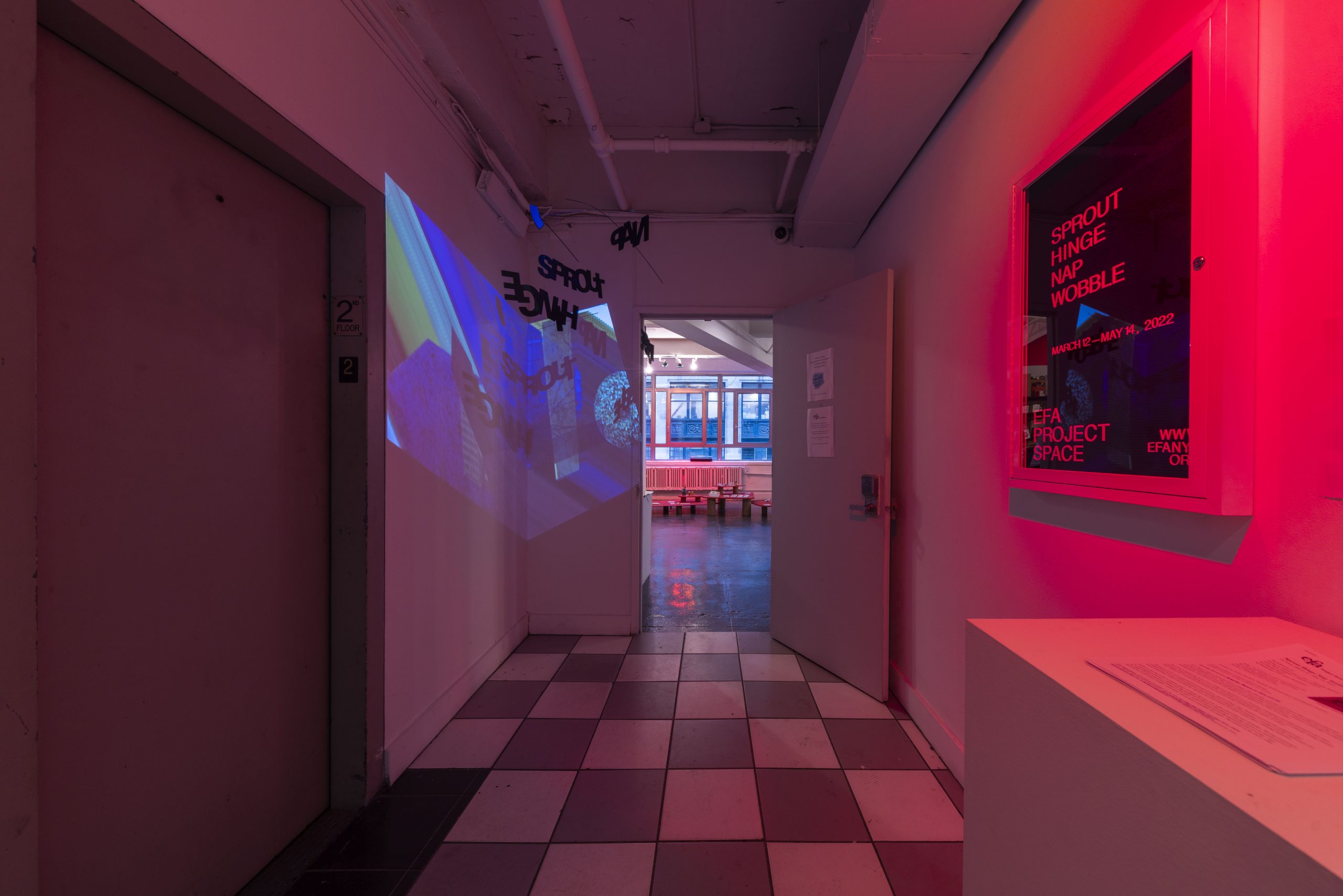 An overhead camera remains fixed on several asymmetrical, reddish tables. Atop the jaunty tables rest orderly groupings of items — a grid of plastic baggies; a line of paper packets — whose details aren’t discernible from this camera vantage. The uneventful scene is live streamed on Twitch as part of Sprout Hinge Nap Wobble, a group exhibition at EFA Project Space curated by Dylan Gauthier, Radhika Subramaniam, and Marina Zurkow. The deadpan, Warholian stream is the opposite of the action-packed video gaming content for which the Twitch website is known. This anti-sensational bent is in keeping with the ethos of the larger exhibition and of the broadcast work, Take, Leave, Knoll* … *the act of arranging a group of objects parallel or perpendicular to each other (2003-ongoing), a plant swap organized by Eating in Public, a longtime collaboration between artist Gaye Chan and scholar Nandita Sharma dedicated to creating cultural space for anticapitalist free exchange.

The playfully titled exhibition’s other works also carve out pockets of space for alternative forms of relation, bodily ones in particular. Anna Rose Hopkins and Marina Zurkow’s low-lit installation, “Languish at the End of the Ocean” (2022), consists of three office chairs converted into makeshift spa chairs, where visitors can sit and listen, via headphones, to an “audio theater ” piece. The cushioned benches of Sal Randolph’s Slow Time (2022) are intended for visitors to lie down and watch a watery cityscape projected on the ceiling, or even take a nap. From Hardin Hoyle’s modular, U-shaped wooden chairs (One or Two Seat2022), and festive planters (June 1998 and The Museum renovation, both 2022), were used as the set for a light and sound performance in late April. Prints from Marina Zurkow’s droll Animal Revolution series (2022) — drawings made for philosopher Ron Broglio’s eponymous recent book, such as a jellyfish in the shape of an atomic bomb cloud — hang in a room with offbeat furniture, including a wall-mounted shelf where visitors can fix themselves a cup of kombu tea.

For all its quirks, Sprout Hinge Nap Wobble‘s immersive elements never feel gimmicky, in the way of Instagram-friendly art. Each body of work gets its own dedicated gallery space and has been designed for pause and repose rather than selfies. The exhibition includes some art objects to see but the emphasis is on activities visitors or performers can do. Most of those activities are slow and contemplative: drinking tea; listening to a guided meditation; lying down and napping. The installations feel oddly quiet, open, capacious, as if the galleries were stages waiting for actors. The linguistic ambiguity of the show’s title — each of its words can be read as noun or verb — hints at a push-pull between things and deeds, inertia and liveliness.

The invitation to nap, in particular, reflects this tension. Napping is a distinctly passive form of physical activity, a rest taken during an ordinarily productive time of day. Napping can provide much-needed respite, a way to recharge one’s tired body, but it can also be disorienting, causing the napper to feel groggy and off-kilter upon waking. The invigorating and defamiliarizing senses of “napping” are at play in Sprout, and their implications are elaborated through the exhibition’s eclectic programming calendar. Eight events took place during the two-month run, from readings and conversations with artists and academics, such as queer theorist Heather Davis, to performances that activated specific artworks. The programming has an eco-social slant that reflects the curatorial team’s separate commitment to communal values ​​in their own practices. (In her “Weedy Talk,” artist Ellie Irons defines “ecosocial art” as “work that combines ecological and socially engaged art through a multispecies lens.”)

The performance I attended, Anna Rose Hopkins’s Acts of Service, a nonprofessional spa whose treatment menu options (such as “Weigh Me Down” and “Forgive Me”) correspond to different ocean depths (the Abyssopelagic and Hadalpelagic zones, respectively), knocked me off balance in a good way. When I arrived at the gallery, Hopkins was lying down, eyes closed, on one of Slow Time‘s padded benches, clad in a navy blue bodysuit, black boots, and seashell press-on nails — a kind of steampunk Oceanic art spa technician’s costume. She asked if I first wanted to listen to Languish at the End of the Ocean‘s audio, then set me up in one of the jerry-rigged spa chairs. The lushly written second-person audio guides the listener through a 30-minute-long fictional narrative in which you morph into various aspects of an aquatic environment, blurring the boundaries between self and others.

For my spa treatment, I selected “Compress Me,” a service corresponding to the ocean’s Bathypelagic zone, a dark, 1,000 to 4,000-meter-deep area “characterized,” according to the menu, “by great pressure and bioluminescent sea life. ” I signed a waiver, made small talk with Hopkins, then underwent the seven-minute treatment, which entailed a shoulder massage from the artist as I wore compression leg massagers. The massage didn’t put me in mind of the ocean, or bioluminescent sea life, or even the boundaries between self and others. Truth be told, I’d dozed off for a few minutes during the audio narrative, which seemed in keeping with the exhibition’s spirit but also left me feeling a bit dazed.

I was all the more surprised, therefore, when upon completion of the treatment Hopkins wrote me a receipt for a reciprocal act: “Cost: hold my head in your lap for 2 minutes.” I hadn’t realized the performance involved reciprocal exchange; the unexpectedly intimate cost felt like a gesture of trust on Hopkins’s part of him. Now I was definitely thinking about the boundaries between selves and others, intimates and strangers, as this person I met less than an hour ago, and had barely conversed with, knelt beside my chair and rested her head in my lap, her costumed torso rising and falling like the breathing of a vulnerable animal.

Strange as it sounds to say, the vanguard of past and, especially, present eco-art won’t necessarily appear all that ecological or even artistic in the future. Sprout contains works that involve plants and water and animals and food, yet what makes them ecological is not their subject matter, nor their medium, but their awareness of the connection, intimate and fraught, of everything with everything else. Hopkins’s performance and the exhibition more broadly explore what conditions might make possible small acts of care between strangers, human and otherwise, as well as how such care might occur at larger scales.

As a response to the many crises of the moment — climate, the 2022 Russian invasion of Ukraine, democratic backsliding in the US — this approach can seem impractical, an infinitesimal salve applied to a planet containing no shortage of pain. But the curators, who in their own practices create plucky, alternative structures of relation — from a boat-building and publishing collective to a collaborative designs that climate change emojis — are under no illusions that individual awareness translates to action at the necessary scale. They’re simply doing the work they can, in the ways they can, making space for gentleness and whimsy in their exchanges with others.