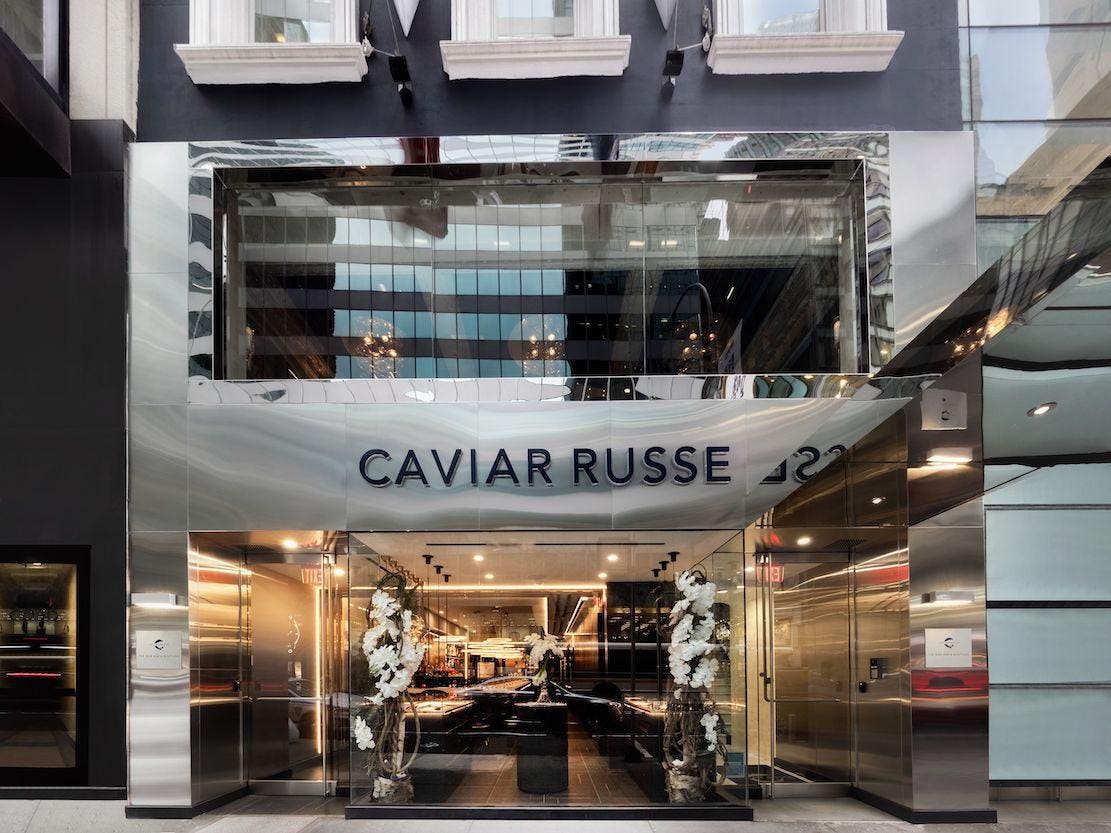 For a quarter century now Caviar Russe has been snugly perched above Madison Avenue with little fanfare but a very faithful international clientele. It opened in 1997 when the tasting menu was $75 and the array of caviar included the finest Caspian Sea varieties that gave the restaurant its name.

Then, in 2005, the world’s gourmands went into shock when the US banned imports of Russian and Iranian Caviar because of severe overfishing and the intrusion of dams and power plants, followed by a total worldwide ban in 2013 to keep the prized sturgeon from extinction. China rushed to fill the void—now accounting for 84% of the world’s sturgeon production—but most of it is bland and a pale shadow to the Russian McCoy.

Caviar Russe was not about to change its name to Caviar Chinois. Instead, it arranged to import caviar from a small artisanal farm in Germany that uses sustainable methods and the sturgeon species used in Russia. So, Caviar Russe, which has a branch in Miami, has been able to maintain a clientele for their product (also sold online and at retail shops). All the better because Caviar Russe’s West Side competitor, Petrossian, closed its restaurant, with only a take-out café remaining.

Since last fall, the second story restaurant has been sitting atop the swank street level Bar at Caviar Russe, with a shorter menu and many raw selections overseen by longtime chef Edgar “Teddy” Panchernikov.

Walking in off the avenue, you’re greeted by a stunning setting with a 14-seat bar and a 28-seat lounge to the rear, with a rotating selection of art by David Drebin and Olympics symbol-like circles of light. There is also a caviar boutique here selling accessories and gourmet products, which makes picking up a little something to snack on or bring home a capital idea.

The suggestion to begin downstairs then move upstairs was a capital idea, for my wife and enjoyed not just the appetizer-portion food at the bar but also the conversation we had with the staff and management about the new place, which offers a $125 tasting menu of six “bites” plus dessert. Among the raw bar options there is a selection of oysters, as well as King crab, bluefin tuna with wasabi and ponzuso delicious chirashi bowl with caviar, tuna hamachi, salmon, uni and sushi on rice. The well-fatted bull tartare comes in a crispy nori cone topped with caviar, while the “Everything Bagel” is topped with silky, subtly smoked salmon with tangy pickled shallot and caviar. The delicious fun continued with lobster rolls in luscious brown butter with caviar, and a beam bun containing unexcepted foie gras, eel and shiso. Richly flavorful was a creamy sabayon of uni on brioche with orange puree and nori.

The restaurant’s caviar itself comes with some of the most delicate blini I’ve ever had, as well as with lightly toasted, crustless bread with which you use the correct mother of pearl utensil to spread on the roe. I candidly admit that none of the non-Caspian Sea caviar I’ve had in recent years has met the Russian examples of beluga, sevruga, osetra and others I once loved, but Caviar Russe’s German roe is among the better competitors I’ve tasted , with a very clean, not-too-salty flavor.

Bolstered by such bright flavors and a couple of glasses of Champagne from a long list, we proceeded upstairs to the main restaurant, which is fronted by a counter of cooks. We entered a small dining room whose tables were well separated, with fine, comfortable cocoa colored banquettes, double tablecloths, exceptional stemware, and what look like glass Champagne bubbles floating in the air, Czarist murals of happier times in old St. Peterburg, and a long window overlooking Madison Avenue.

The service staff could not have been more professional, which is to be expected from a team that counts many veterans going back a decade or more. It’s an ambience where all women dress up and where (once) men did too, though many of the latter now show up wearing what might have just been plucked from the sale counter at Old Navy.

Here the tasting menu is three courses for $175 (among the highest in New York) with supplements; all dishes are also available à la carte. All dishes are very pretty—and the lighting allows you to see their color—and in the preparation, contrasting textures and complementary condiments everything fits impeccably, as with a dish of lobster made rosy with beets, a crunch of cashews and a citrus sauce.

A dish that sent us swooning was a breaded, fried five-minute egg infused with parmesan foam and a bit of nasturtium topped with osetra caviar.

There was also a tender tortelli of rabbit with nettle and almonds, and the lamb with delicate spring garlic and fava beans and pistachios was of such exquisite quality and flavor it might rank with Kobe beef.

Desserts showed great technique without pretension, including are a pretty Baked Alaska with white chocolate and passion fruit, and a refreshing “Buddha’s hand” of coconut and grapefruit.

Not done yet: A glass of chocolate crèmeux was presented along with warm, light-as-feather madeleine cookies with chocolates, jellies and pastel-colored macarons.

Lingering over a well-made espresso in a fine china cup and looking out over an avenue with stores still lighted and the sky turning indigo blue, we felt much higher than the second floor at Caviar Russe, whose remove is a great part of its charm , just as the sexy new Caviar Bar has all its own.

The restaurant and boutique are open from Tuesday to Saturday, 5:00pm to 10:00pm.