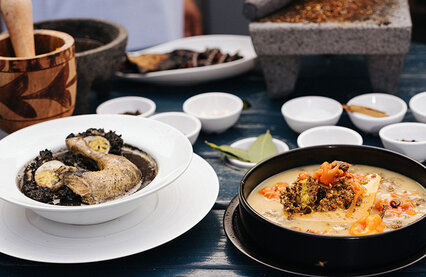 Growing up in Santa Paula, California, Rachel Aguilar watched her as her grandmother butchered chickens for family meals and recalls the fresh beans, tortillas and salsa her Grandma would make from scratch. Now, at age 92, she credits her longevity to the fresh and healthy dishes her grandmother taught her to make and that she prepared, in turn, for her own children and grandchildren.

Amara Aguilar, along with her daughter and her grandmother, prepared a traditional dish of enchiladas.

Aguilar’s tale, as well as the oral histories of nine other Mexican and Mexican American granniesor grandmothers, are part of a new museum exhibition curated by Sarah Portnoy, professor (teaching) of Spanish at the USC Dornsife College of Letters, Arts and Sciences.

Titled “Abuelita’s Kitchen: Mexican Food Stories,” the exhibit takes those histories transmitted and combines them with recipes, kitchen artifacts and a documentary film to provide a glimpse into the role traditional dishes played in the women’s lives, and how they their culinary knowledge to their children and grandchildren.

The exhibit opens May 14 at LA Plaza Cocina in Los Angeles, with a special screening of the documentary film at the museum on May 12. The project was made possible with support from California Humanities, a nonprofit partner of the National Endowment for the Humanities.

“Food-centered life histories have the capacity to portray the voices and perspectives of women who have traditionally been ignored or marginalized,” says Portnoy. “This project aims to amplify the voices of a group of indigenous people, mestizoMexican American and Afro-Mexican grandmothers who have cooked, preserved, and passed on Mexican food culture, while creating communities and cultures that are unique to Southern California.”

Digital media for the exhibit was created by students in a course titled “Recording the Voices of Latinx Women & Food in Los Angeles: A Multimedia Oral History Project” co-taught by Portnoy and Amara Aguilar, professor of journalism at the USC Annenberg School for Communication and Journalism (and granddaughter of Rachel Aguilar).

The two USC professors taught students how to conduct interviews for oral histories, edit audio and video, make graphics and create a website featuring the stories. The students also conducted interviews with grannies (a different group from those in the exhibit), giving them the chance to partake in the passing of knowledge from generation to generation.

Cauliflower lampreada is a vegetarian dish of battered cauliflower that is fried and then simmered in a tomato sauce.

Portnoy says the project aimed to capture not only traditional recipes but how food wove through the fabric of the women’s lives. Although food is often associated with joyful occasions and celebrations — and many of the stories featured these as well — Portnoy was surprised at the wide variety of emotions the dishes evoked in the grandmothers.

“They spoke of hardship, domestic abuse, slavery. There were a lot of tears,” Portnoy says. One woman, half-indigenous and half-Black, the descendant of slaves brought to Mexico, talked about an ancestor who helped feed slaves who had escaped from ships carrying them across the Atlantic. Another recounted how she spent long hours selling tamales from a cart to pay for the McDonald’s food her children desperately wanted to try.

Aguilar adds that some of the women discussed more topical food issues, such as the high rates of obesity and diabetes in the Latinx population.

“One grandmother talked about the fact that women can do more than cook. She said they can also make a difference by promoting healthy eating and nutrition. Another grandmother spoke about her work de ella as an activist for street vendors. Many of these grannies are not only the centerpiece of their families, but they have also had so much impact on our communities, and it’s important to share these stories,” Aguilar says.

Portnoy says that the experience of interviewing the grandmothers was also humbling in some ways.

“It might take me a day to make these dishes, which they are preparing with such grace and ease and without stressing about it,” she explains.

In the course, Portnoy and Aguilar taught the students about Mexican culture, especially food culture, and how to conduct oral history projects to preserve the traditions and histories of older generations.

Portnoy’s portion of the course involved an introduction to Mexican and Mexican American culture in LA There were field trips to Boyle Heights, Olvera Street and LA Plaza de Cultura y Artes, and lectures on topics such as gentrification and the history of redlining and discrimination of Mexican communities in LA

Aguilar taught the students how recording an oral history differs slightly from conducting an interview and requires a few additional skills. She wanted her students to learn how to have empathy and compassion for their interview subjects, and how to convey the sense of a person’s story or personality accurately and in a way that was personal and genuine. She also instructed them on how to create digital content for distribution on different media platforms.

“They made short videos for YouTube, they created content for Instagram, and they produced and edited content we had shot for the exhibit. This project is multidimensional and is going to reach people in a lot of different ways. It is especially important in that it preserves stories of our cultures for future generations,” Aguilar says.

Portnoy adds that the students also learned lessons that went beyond the technicalities of recording oral histories. “They learned a lot from all of this, not just how to use the technology, but all of these different experiences, how to appreciate different cultures, the challenges of being an immigrant, and how to appreciate the work behind preparing complex dishes in Mexican cuisine.”

Aguilar interviewed her own grandmother for the project and joined her grandmother, father and daughter — four generations of the family — to prepare her grandmother’s traditional dish of enchiladas.

“My grandmother on my maternal side of the family has passed, and we lost all of her recipes. So, getting to do this with my paternal grandmother — to cook with her and preserve her recipes and her traditions de ella — was just really meaningful to all of us, ”Aguilar says.