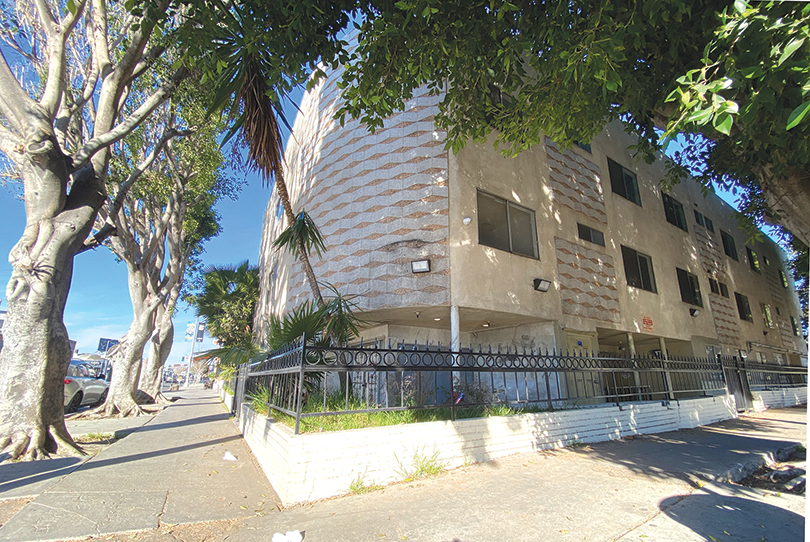 A building at the corner of Melrose Avenue and Alta Vista Boulevard is being considered as a possible facility for homeless individuals. (photo by Edwin Folven)

The Los Angeles City Council’s Planning and Land Use Management Committee voted unanimously on May 10 to advance a motion to the City Council to consider expanding locations where homeless shelters can be placed.

The motion was authored by Councilman Mike Bonin, 11th District, and co-authored by Councilmembers Nithya Raman, 4th District; Marqueece Harris-Dawson, 8th District; and Bob Blumenfield, 3rd District. It calls for the Los Angeles Department of City Planning to report to the council on potential locations for shelters and interim housing in zones where they are not currently allowed. While the motion is only an inquiry at this point, it raised concerns that the council may be poised to allow more shelters in residential neighborhoods.

“There are solutions needed for the unhoused, but we can’t lose sight that one solution can cause 10 more problems,” said Peter Nichols, co-founder of Melrose Action. “We are very concerned that placing these shelters in residential neighborhoods could have a negative effect. We all have to get together to work on solutions so they are in the best interest of everyone.”

“We are concerned about it too,” she said. “The answer we have been getting back is it’s just a study, nothing is being done and it’s just exploratory. We did write a letter [to the City Council] expressing our concerns. We will be following it.”

The council’s PLUM Committee approved the motion on May 10 without opposition. Councilman John Lee, whose 12th District in the San Fernando Valley includes many areas zoned for manufacturing, said he does not want to see shelters take the place of facilities that provide jobs, but added that he was open to looking into places where shelters may be appropriate.

Bonin, who authored the motion, could not be reached for comment. Los Angeles City Councilman Paul Koretz, 5th District, is reserving comment until he sees the report from the planning department, Koretz’s spokeswoman Alison Simard said. Dan Halden, a spokesman from Council President Pro Tempore Mitch O’Farrell, 13th District, said the councilman wants to see the report and hear from constituents before considering how to move forward.

“Generally, the city is in need of more shelters and we should keep our options open in terms of finding new sites,” Halden said. “Our office is always looking for creative solutions to find both temporary and permanent housing for unhoused Angelenos. On this item, we will await reports to come back from the various departments, and we also want to understand more specifically what the community process will look like.”

The motion by Bonin to explore other locations for shelters will be considered by the full City Council at a date to be determined.

While the city considers potential locations for more shelters, Nichols cited an existing proposal for a potential shelter at a vacant building at the corner of Melrose Avenue and Alta Vista Boulevard as an example of the need for more communication with constituents. He said people in the neighborhood are eager for more information about the proposal.

Plans for the potential shelter, which remains under consideration by the City Administrator’s Office, have not been finalized, Simard said. No further details were available, she added.

“As of now, it is early in the process and it is in the hands of the CAO to determine whether this property will meet the needs of people experiencing homelessness. I have been working diligently to get facilities like this completed throughout my district,” Koretz said in a statement. “Whether this project will become a reality is up to the CAO. If it is determined that this property is feasible, my office will start the community outreach.”