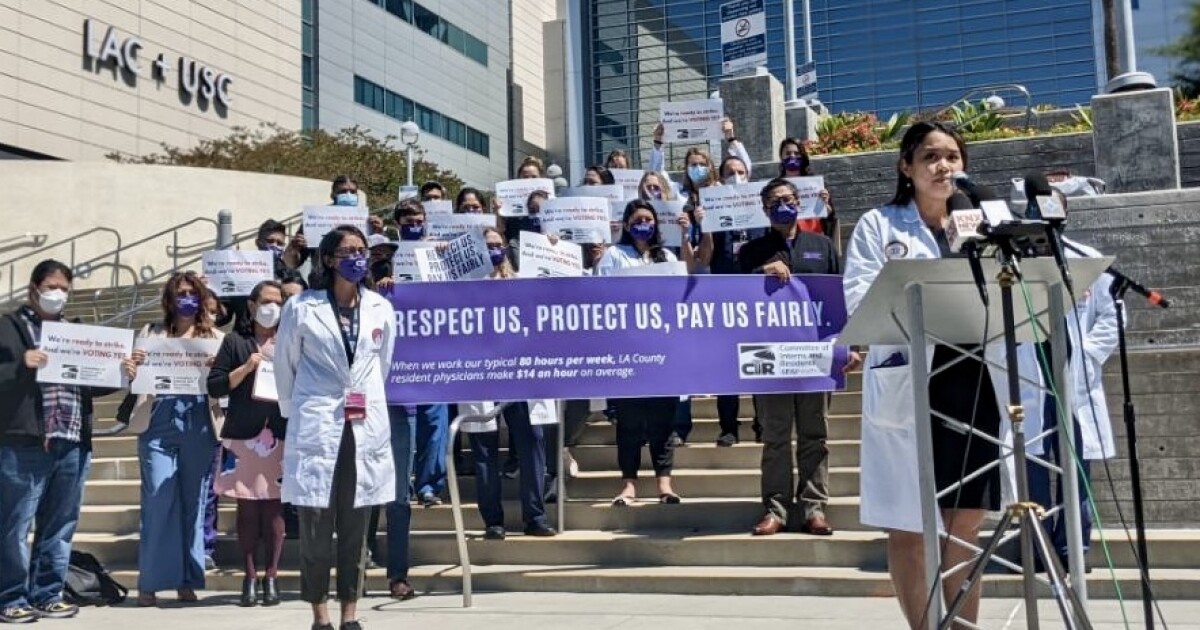 Over 1,300 unionized resident physicians at three Los Angeles hospitals will hold a strike vote next week amid a bargaining impasse with LA County.

By threatening to strike for better pay and housing stipends, the residents at LAC+USC Medical Center, Harbor-UCLA Medical Center, and Martin Luther King Jr. Outpatient Center say they hope to avoid a summer walkout at those facilities.

The resident physicians, who are asking for a 7% raise, are represented by the Committee of Interns and Residents, a chapter of SEIU. The last contract expired Sept. 30, 2021.

At a press conference in front of LAC+USC Medical Center Thursday, Camila Alvarado said she would vote to strike. Alvarado is a second year family resident at Harbor UCLA.

“We have been bargaining now for over six months… But they [L.A. County] have continuously canceled meetings with us, have come unprepared to several meetings, have not given us any meaningful proposals [in response] to our economic proposals. And that is why we now believe that we are justified in doing a strike vote for this unfair labor practice.”

Residents are doctors in training. They graduated from medical school and are now training to be a specific kind of doctor, such as a pediatrician or a type of surgeon. In their first year of training they are sometimes called interns.

“We’re doctors, and people see us with white coats, so they think we make what you would think a doctor makes,” Alvarado said. “But in residence, if you divide by the number of hours we work, which is about 80 hours a week, we actually make about minimum wage, if not less than minimum wage.”

She says it’s difficult and frustrating to find housing in LA’s expensive rental market or pay for childcare on a resident’s salary. She also fears a chilling effect on hospital retention, as residents like her choose to leave for more lucrative areas when their training ends.

“Resident salaries range between $50,000 to $65,000 a year, before taxes are taken out,” Alvarado said. “A lot of us who chose the hospitals that we currently work at, did so because of the patient population, we are working with the most underserved patients in Los Angeles. And that’s exactly the type of medicine we wanted to be doing to help those that needed it the most.”

Labor negotiations with the county are handled by the LA County Chief Executive Office. In a written response the CEO’s office said:

Negotiations are ongoing and the County remains hopeful of reaching a fair and fiscally responsible contract, as the CEO mentioned during the public hearing on the County budget today. The pending authorization vote by the Committee of Interns and Residents is not a strike and services to the public are continuing without interruption.

In a written response, the LA County Department of Health Services, which operates the hospitals said:

In support of our mission, LA County Health Services provides extraordinary care in our community with compassion and respect. Our health services could not be possible without our workforce members who deliver best-in-class care. Together we are dedicated to those we serve and know first-hand how hard everyone worked to get us to where we are now. We want to thank our workforce members for their heroic efforts throughout the pandemic and as we move towards a better normal.

The voting period for the strike will end May 30. A CIR/SEIU representative said it is unclear when a strike and walkout could take place over the summer, if approved by members.