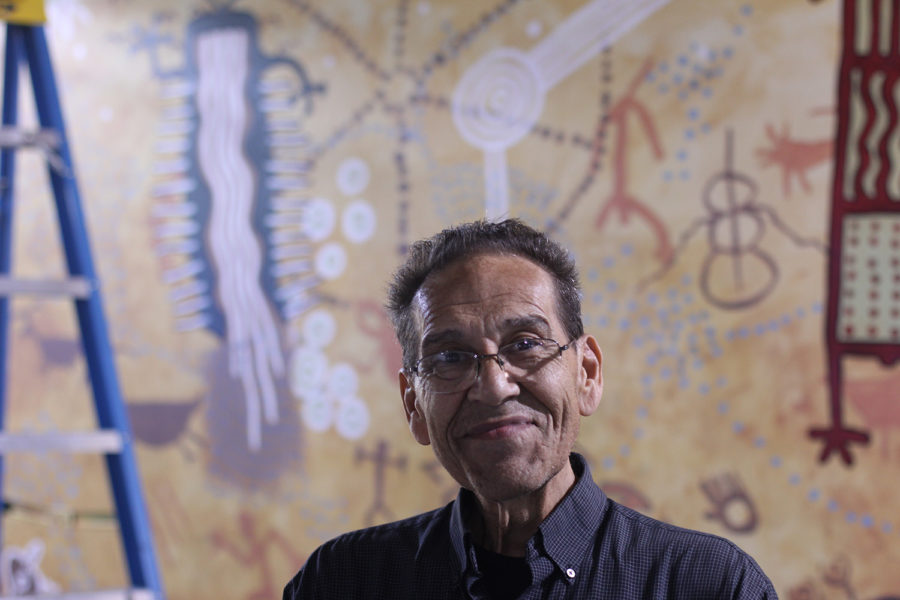 Amidst the buzzing lights and echoing voices of the AH Building parking garage, a colorful merging of past and present greets drivers heading to classes at San Diego City College.

Terri Hughes-Oelrich, a fine art professor at City, was inspired to help fill the underground walls with public art, and she reached out to a former student to get started.

The first of the garage pieces to be completed was designed by Kumeyaay artist and former City student Kenneth Banks.

For Banks, art has provided healing, comfort and inspiration throughout his life – on his travels to Southeast Asia and Australia, at home in Ramona with his grandmother as a child, in the midst of his handful of near-death experiences, and within City’s art community.

A large figure reminiscent of a centipede adorns the left side of the painted wall – a figure that Banks describes as his “healing symbol.”

Backpacking through Indonesia years ago, immersing himself in various cultures, he visited a temple near Yogyakarta. Fellow travelers talked Banks into experimenting with hallucinogenic mushrooms from a nearby tribal village. He suffered an allergic reaction coupled with severe sunburn and dehydration after falling asleep on a beach. Banks lost 40 pounds lying in bed for a week, only then gathering the strength to finally reach a hospital.

He said that figure provided comfort and an impetus to literally crawl for help during those dark days. Though he had seen it before, the figure took on greater significance after he nearly died.

It is now one layer among many in the mural Banks titled “Honoring Our Ancestors.”

A path to art

Banks trained in architecture, receiving bachelor’s and master’s degrees from UC Berkeley, yet quickly realized the work lacked the creativity he craved.

I have sought guidance from a Native American counselor, who helped illuminate a path to the art world.

Representing other artists helped him realize he could work as an artist himself.

Banks grew up in Ramona, a member of the Iipay Nation of Santa Ysabel where his grandmother was influential in his early years.

He recalls at age 8 or 9, a teacher chastising him in school for daydreaming. When he later told his grandmother about him, she said, “Oh no. Your teacher does not know anything. Daydreaming is visioning.”

It reduces stress and gives you ideas, she told him, it’s one of the most healthy things you can do.

She also told him about what she called “dream windows” in Kumeyaay culture – a small object surrounded by a feather lei produced as a ritual, creative process, getting you “out of your head.”

Years later, he was inspired by her stories to create his own dream windows, selling them successfully at powwows throughout California.

After his mother, uncle and grandmother all died within an 18-month time span, Banks returned home from Northern California.

Eventually looking to reinvigorate his joy in art, which served as his business, Banks took an art class at City with Hughes-Oelrich.

He kept rolling over the next few years and “got alive again.”

The experience provided a way to separate a studio art space from home, and the chance to be around other artists.

It was through this connection with Hughes-Oelrich that the garage mural was born almost a decade later.

Banks said when she first approached him to design a mural, he was hesitant. But hearing she wanted to honor the local Kumeyaay community, her interest was piqued.

A mural in layers

Banks created the design, which Hughes-Oelrich projected onto the wall, offering current and past students a chance to help bring the mural to life.

Although he wasn’t sure what to expect from the finished mural, he said he was stunned at the likeness to his design.

Banks said he has always done rock paintings and has been fascinated by them.

“It’s a connection to the people in the past,” he said. “When I’m doing it, I’m thinking of how they lived and how they struggled and just what a different world it was.”

All but two of the figures Banks used for the mural are native Kumeyaay designs he gathered, drawing from a rich array of Kumeyaay art that has been documented and photographed in San Diego County and Northern Baja California – the land of the Kumeyaay tribe.

As he collected designs in preparation for the work, he remained open to incorporating various cultures, but was shocked at how much incredible Kumeyaay artwork he found all across the local area.

“I don’t need to do any of these other designs. I have art here I can work with from our specific ancestors,” he added.

The two figures he did include that are not directly from Kumeyaay influences are his personal healing figure on the left – the centipede-like being – and the large red human figure on the right.

Banks said the red form was inspired by a figure he loves near Death Valley, which reminded him of a kachina – a concept in the Hopi Pueblo culture he likes to the idea of ​​angels. Kachinas can take various forms – dolls, art or people in regalia representing them.

While not specific to the Kumeyaay tribe, the kachina has connections to its distant Native American relatives – the Zuni, Paipai, Hualapai and others, Banks said. He also wonders if the kachina movement came here at some point, given the various trade routes of the past.

The kachina also reflects a part of Native culture that is still alive today in rituals, dance, dress, and even technology, Banks said.

“I don’t want to just honor the Kumeyaay of today, I want to honor all Kumeyaay from the past too,” Banks said.

Banks said he tends to use layering in his work – three-dimensional forms or colors pushing one another – though he did not intentionally create layers on a large scale in the mural design.

But when he stood back and saw the mural from afar, “I did not realize that I actually was layering,” he said as he stretched his arm across the length of the mural, “– the underworld, the surface world, and the heavens .”

He also pointed out the white zig-zag shape, calling it a lifeline – a symbol he has seen in North America, but first noticed in Australia.

Banks said when he lived in Australia for a year, he spent time with Aboriginal people and was amazed at the similarities of their culture to his own tribe.

Though they spoke and looked different, he saw the same tribal structure and parallels to personalities he knew in his own tribal council.

Even the landscape was familiar, and his connection to it.

Banks said he also credits his time in Australia and the people he met there years ago as unexpectedly changing his own thinking about how people of color are treated here in the United States.

Slowly over the year he spent there, his viewpoint began to shift.

“It profoundly had a change on me.”

Banks also reflected on the importance of the environment to other aspects of one’s well-being, such as inspiring artistic talent.

When he first came to City College nearly a decade ago, he said the facility was good at the time, but now the new AH building has taken students to the next level.

Since he has retired, he sits in on Hughes-Oelrich’s ceramics class as a volunteer assistant.

“There’s just amazing talent in that class, and I think it’s because of the facility,” Banks said. “There’s all this equipment, and it’s spacious. It’s just unbelievable.”

the AH Building was completed in 2014 and includes an array of modern equipment, a new gas kiln for clay, balconies and plenty of natural light.

“This new facility is just so good for the students,” Banks said.

Hughes-Oelrich is also grateful for what Banks can share with current students, and the social aspect classes provide – communication between younger and older artists, various levels of experience, all learning from each other.

Student volunteers from various classes have also helped paint the next mural in progress in the AH garage of 40 threatened bird species – a collaboration between artists and the City College Audubon Club.

Banks offered some of his work – dream windows and visioning shields – at the recent craft sale at the City Gallery, alongside other faculty and student works.

He said both types of pieces use a similar concept – a central figure surrounded by a feather lei, with four feathers for the four directions. The dream windows are intended to be smaller, at 5-by-7 inches, as his grandmother described. The visioning shields are slightly larger at 8-by-10 inches.

Hughes-Oelrich made ceramic mugs inspired by Banks’ mural design, which are on sale in the City Gallery.

she said all of the funds raised from the mugs will go to Kumeyaay College on behalf of the mural work.

City Gallery is open Tuesdays through Thursdays from noon to 4 pm for the remainder of the spring 2022 semester.