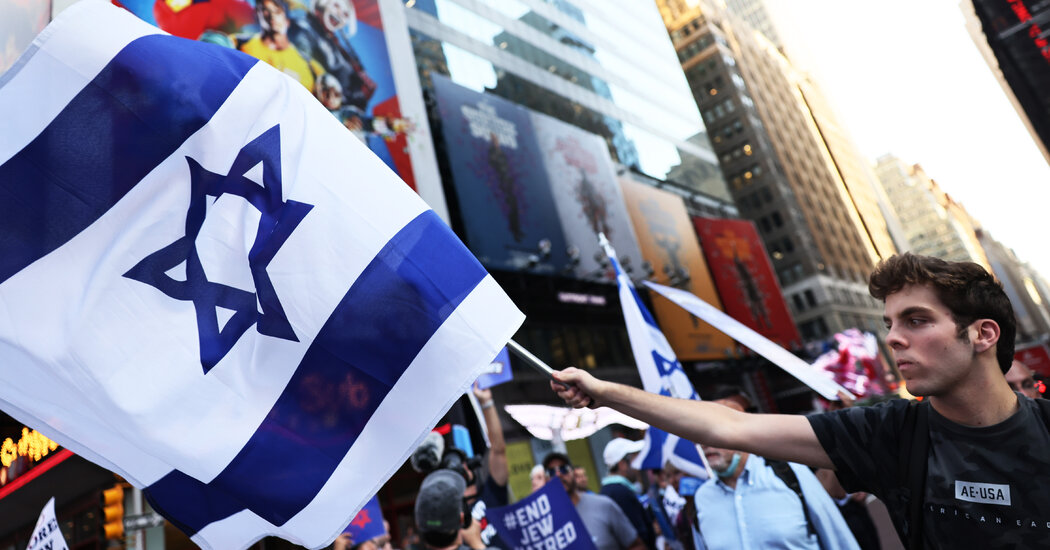 In the past year, the left-wing effort to boycott Israel over its treatment of Palestinians has won over The Harvard Crimson and the Irish novelist Sally Rooney. It’s even affected ice cream: Ben & Jerry’s has refused to sell its confections in the occupied territories.

It has also made inroads in New York, home to the world’s second-largest Jewish community, where the Boycott, Divestment and Sanctions movement has gained support from the local chapter of the Democratic Socialists of America, the influential far-left political group.

But now a new group, backed by a billionaire hedge fund manager, is seeking to counter that movement by creating a political action network to support candidates in state legislative and local races who embrace Israel, and oppose candidates who do not.

The group, the New York Solidarity Network, will act something like a local American Israel Public Affairs Committee, commonly known as Aipac, according to several individuals who have spoken with its organizers. Like AIPAC, the New York network is set up as a membership organization whose leaders will encourage donors to give to candidates they regard as being pro-Israel. It has not ruled out the idea of ​​creating its own political action committee.

The organization will oppose candidates aligned with initiatives like the Boycott, Divestment and Sanctions movement, which encourages the shunning of Israeli businesses to end “Israel’s apartheid regime.”

Appearing to be among the first Israel-focused organization in the nation to seek to influence elections at the local level, the group has hired Moonshot Strategies, a lobbying firm with close ties to the administration of Mayor Eric Adams, to help it choose which races to focus on. (Fabien Levy, a spokesman for the mayor, said Mr. Adams has no knowledge of the group.)

Corey Johnson, the former City Council speaker, has signed on as a consultant. The board also has the backing of Daniel S. Loeb, the billionaire hedge fund manager, according to three people briefed on the organization. Mr. Loeb declined to comment.

The creation of the network highlights the growing fissure between the left-leaning and younger flank of the Democratic Party, which often aligns with the policies of the Democratic Socialists of America, and the party’s more traditional, centrist flank, which has long considered support for Israel an inviolable foreign policy plank. Its rise also points to the growing role that the Israeli-Palestinian conflict plays in state and local elections in the United States, where pro-boycott activists increasingly tussle with politicians who implement anti-boycott laws.

“I’m not aware of any similar organization on the state level — untethered from a national one — that has launched an effort to affect legislative elections by supporting (or not) candidates based on a litmus test of their pro-Israeli credentials,” Aaron David Miller, a senior fellow at the Carnegie Endowment for International Peace, wrote in an email.

The group charges $1,000 for an individual membership and asks members to pledge at least $5,000 to a slate of “candidates, causes and projects aligned with our mission.” Its 501(c)(4) structure allows donors to remain anonymous.

The group is joining a growing field of well-funded entities, including a PAC allied with Mr. Adams, aiming to sway the New York State Legislature — whose entire body is up for re-election this year — toward more centrist politics.

The New York Solidarity Network held a kickoff cocktail party in March at the Greenwich Village townhouse of its chairman, Gary Ginsberg, a former SoftBank senior vice president. Ritchie Torres, a congressman from the Bronx, spoke, as did Mr. Johnson, the former City Council speaker. Both declined to comment for this story.

The group has cast itself as an explicit counterweight not just to the BDS movement, but also to the Democratic Socialists of America, the anticapitalism group that counts Representative Alexandria Ocasio-Cortez as a member.

“This is in response to rising political challenges from far-left DSA-aligned candidates supporting BDS and other anti-Israel positions,” Tyler Deaton, a Republican LGBTQ activist serving as the group’s senior adviser, wrote in an email, shared with The Times , that was distributed before a group event. “Anti-Israel candidates and elected leaders are on the rise, emerging from the extreme political margins on both sides.”

Jeremy Cohan, a co-chairman of the DSA of New York City, took the group’s formation as a sign of his own movement’s strength.

“There is a thriving and deepening support by American Jews for Palestinian rights, and opposition to carte blanche support for Israeli policy in violating those rights,” Mr. Cohan said.

The question of Israel, its right to exist, and its treatment of Palestinians has percolated through state politics for years.

In 2016, Andrew M. Cuomo, then New York’s governor, signed an executive order barring the state from doing business with companies aligned with the BDS movement. The executive order was renewed by his successor, Kathy Hochul, and remains in effect.

In 2020, the DSA caused a local firestorm when it asked City Council candidates seeking its endorsement to “pledge not to travel to Israel if elected to City Council in solidarity with Palestinians living under occupation,” in a questionnaire.

“We know there’s a long tradition of boycotts and sanctions being used against persecutory regimes,” Mr. Cohan said last week. “The US is sanctioning Russia right now for the crimes it’s committing, and so we think this is a perfectly legitimate and important tool in applying pressure on the Israeli state to change its political behavior.”

The Jewish community is, of course, not monolithic; Jeremy Ben-Ami, the president of J Street, described it as “a disputatious people.” And several Jewish activists noted the presence of other New York organizations with less Israel-specific aims.

“You put three Jews in a room and you get four or five organizations, because none of them can get along,” said Liz Krueger, a Jewish state senator from Manhattan.

But Jessica Haller, a former City Council candidate from the Bronx, said she was drawn to join the New York Solidarity Network because she felt ostracized from progressive circles as an environmentalist who also identifies as a Zionist and supports the existence of Israel. She argued it is imperative for activists like her to ensure there is a space for progressive supporters of Israel.

Ms. Haller still smarts when she recalls the backlash she experienced on an environmental justice email chain, when fellow members discovered she identified as a supporter of Israel.

“The conversation went something like this: ‘We’ve discovered she’s a Zionist so therefore she can’t possibly take racial justice seriously,’” Ms. Haller said. “I was really shaken to my core.”