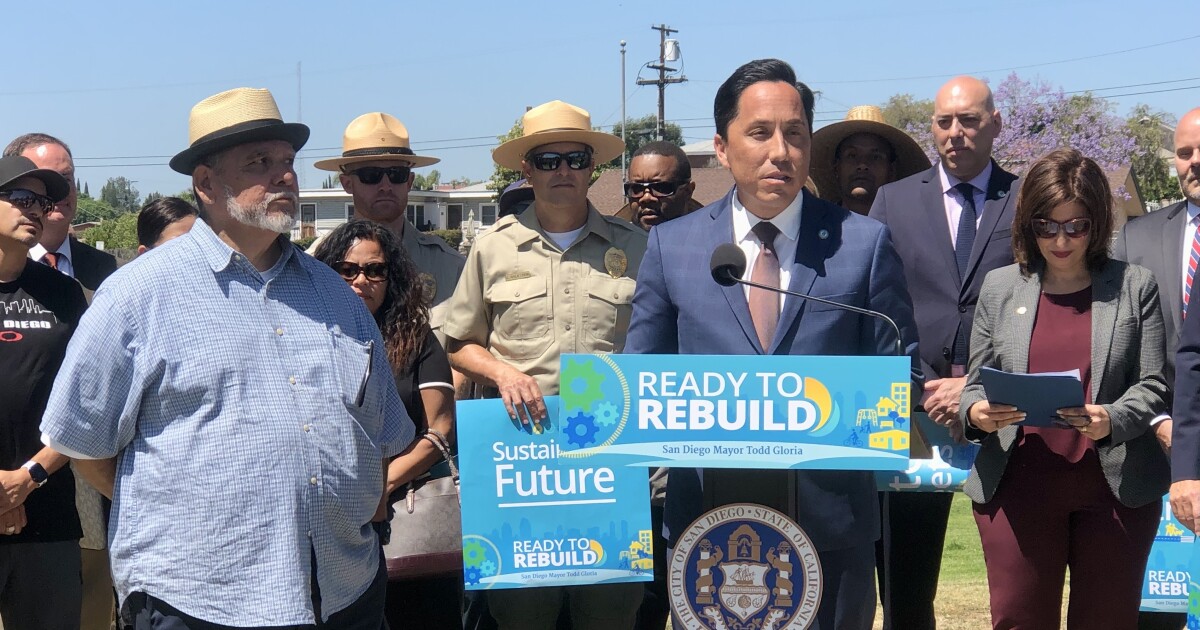 “The city has historically pushed a lot of critical infrastructure needs to the back burner over the past few decades and I won’t allow us to do that any longer,” Gloria said at a news conference at a park in the Mountain View area on Thursday. “My budget proposal is a commitment to rebuilding San Diego and a better future for all of us — a future with a reliable water supply, functional stormwater and sewer systems, smooth streets and great parks and libraries in every neighborhood.”

A total of $349 million of the $808.9 million Capital Improvements Program is earmarked for Phase 1 of Pure Water — the water recycling program touted by the city as being able to supply nearly half of San Diego’s drinking water by 2035 while cutting in half the amount of treated sewage discharged into the ocean.

Gloria’s budget includes $343 million to upgrade and repair existing water and sewer infrastructure, including pumps, treatment plants, pipelines and reservoirs as well as more than $27.5 million for a major overhaul of the city’s aging and inadequate stormwater system.

San Diego has secured $359 million in low-interest federal loans to help pay for a five-year, $733 million program of upgrades for the drainage system that keeps pollution from flowing into waterways and prevents flooding in neighborhoods during rainstorms.

Additionally, Gloria proposes increases in street resurfacing funding by $14.3 million for a total of $77 million in the coming fiscal year, with another $12.3 million to fix sidewalks in 600 locations around the city, improve traffic flows at intersections, and remove graffiti and weeds.

“For years, the city has underinvested in our infrastructure needs, and I am proud that this mayor and council are getting to work to fix our roads, parks, libraries, and more so that we remain America’s Finest City for generations to come,” said Councilwoman Marni von Wilpert. “As chair of the Active Transportation and Infrastructure Committee, I am honored to work alongside our mayor who is serious about addressing our city’s aging infrastructure issues by proposing the largest infrastructure investment in our City*s history.”

Gloria’s infrastructure priorities also include two new fire stations — one in Skyline Hills and one in City Heights — as well as more than $11 million to upgrade several city facilities with repairs to roofs, elevators and HVAC systems.

Next Thursday, Gloria will release her May budget review incorporating City Council and public input as well as updated revenue projections. Final City Council hearings will take place in mid-June and an adopted budget must be in place by June 30.