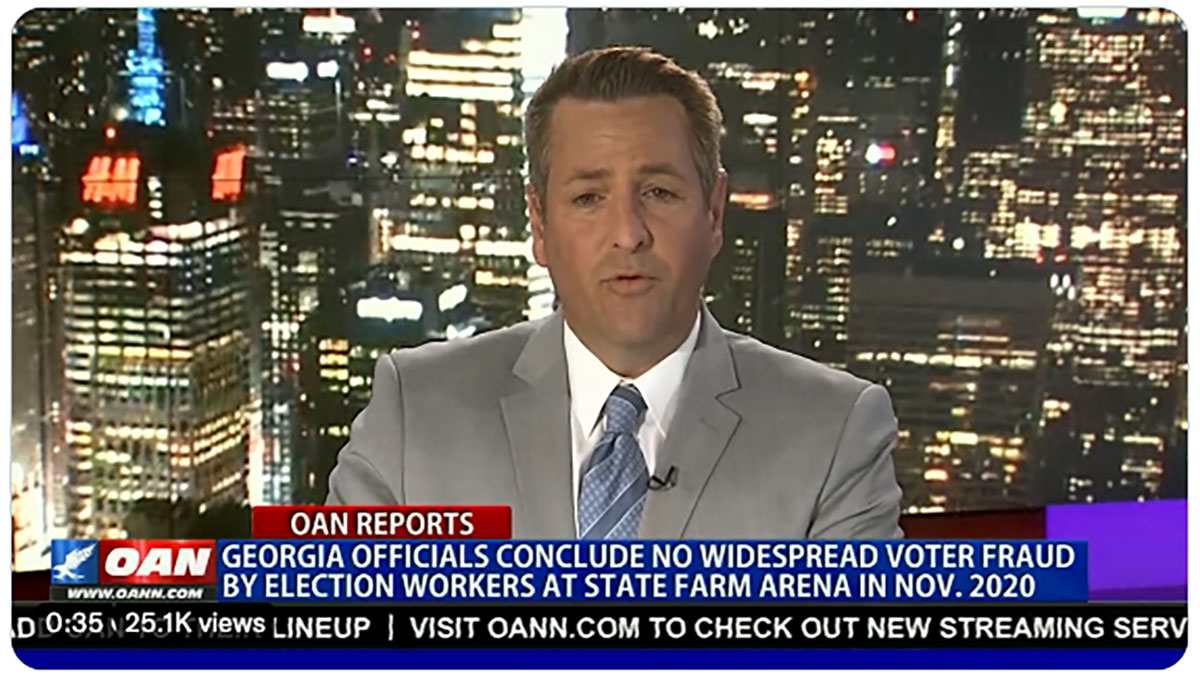 “Georgia officials have concluded that there was no widespread voter fraud by election workers who counted ballots at the State Farm Arena in November 2020,” an OAN announcer said Monday.

The same report, on Twitter, has been viewed 25,000 times. A repeat OAN tweet, conveying the same message, was posted about 5 pm Wednesday.

“The results of this investigation indicate that Ruby Freeman and Wandrea ‘Shaye’ Moss did not engage in ballot fraud or criminal misconduct while working at State Farm Arena on Election Night,” the OAN report continued. “A legal matter with this network and the two election workers has been resolved to the mutual satisfaction of the parties through a fair and reasonable settlement.”

The settlement wasn’t news either.

On April 21, news services reported that Moss, a voter registration officer, and Freeman, Moss’s mother and a temp worker, had signaled a deal to resolve their suit against OAN’s owner — Herring Networks Inc.

But the deal didn’t become official until today, Wednesday, when Judge Beryl Howell of the DC federal court granted a “voluntary dismissal and entry of judgment for defendants” Robert Herring and his son Charles as well as OAN Washington correspondent Chanel Rion.

The Herrings didn’t immediately respond to requests for comment.

But Rachel Goodman, a lawyer for the Georgia plaintiffs, told Times of San Diego: “Unfortunately we are not in a position to comment on the settlement beyond to say that the matter has been resolved to the mutual satisfaction of the parties through a fair and reasonable settlement.”

Several news outlets say the 30-second OAN report was part of the settlement.

OAN hasn’t backed off promoting the false claims of a stolen presidential election, however.

Moss and Freeman are continuing to sue Rudy Giuliani, the former Trump lawyer and New York City mayor, though. They filed an amended complaint Tuesday that alleges “Giuliani’s defamatory campaign had immediate and devastating effects on Ms. Freeman and Ms. Moss.”

At the recommendation of police, the suit says, “Freeman temporarily moved after strangers surrounded her home, knocked on the front door, and attempted to deliver pizzas that she did not order. She was forced to install dozens of pieces of security equipment and change her phone number and email address after receiving hundreds of emails, calls and text messages from strangers, some of which included vile language and threats of physical violence.”

Freeman, who closed her business, “continues to receive threatening communications and fears for her safety when in public and around strangers. .. For Moss ‘part of her, she has received harassing phone and written messages accusing her of treason and insisting that she deserved to die, and her 14-year-old son of her received one call saying he’ should hang alongside [his N-word] momma,’” the suit says.

Giuliani’s “character assassination” of Freeman and Moss is described as a deliberate part of a “Strategic Communications Plan” designed to overturn the 2020 election by engaging in a ‘[n]ationwide communications outreach campaign to educate the public on the fraud numbers’ during the 10-day period” leading up to Jan 6, 2021, the suit says.

Court documents say Giuliani and the Georgia pair “are amenable to the possibility of settlement, but the parties are not presently prepared to settle.”

But he still may seek a summary judgment—a judge’s decision to throw the case out. A ruling on that request may not come until May 2023, according to a motions schedule jointly proposed by both sides.

Lawyers for the Georgia pair estimate a 10-day trial, currently set for June 5, 2023.

The revised suit asks for nominal, compensatory and punitive damages, attorney fees, and declarative relief stating that Giuliani’s statements were false. The court is also being asked to force Giuliani to “remove his false and defamatory statements about Plaintiffs from any website and/or social media accounts.”

“Defendant’s wrongful conduct has inflicted severe emotional distress on Plaintiffs,” the suit added. “They have suffered mental reactions including fright and fear for their safety; horror and helplessness in the face of the intense hatred directed at them by Defendant and by his viewers, listeners, and readers of him; anger; anxiety; sleeplessness; shame; and humiliation. The emotional distress Defendant caused to be affected by Ms. Freeman and Ms. Moss was so severe that no reasonable person could be expected to endure it.”

On March 25, Giuliani defended himself with a brief citing, among other things, the First Amendment, litigation privilege or attorney immunity, the statute of limitations and “because some and/or all of Giuliani’s statements complained of are substantially true.”

But Giuliani won’t be arguing in court, since his law licenses were suspended in his home state of New York and the District of Columbia.

They’re also on the offensive — suing AT&T after being dropped from DirecTV’s channel lineup. Hearings are set between this month and August in San Diego Superior Court.