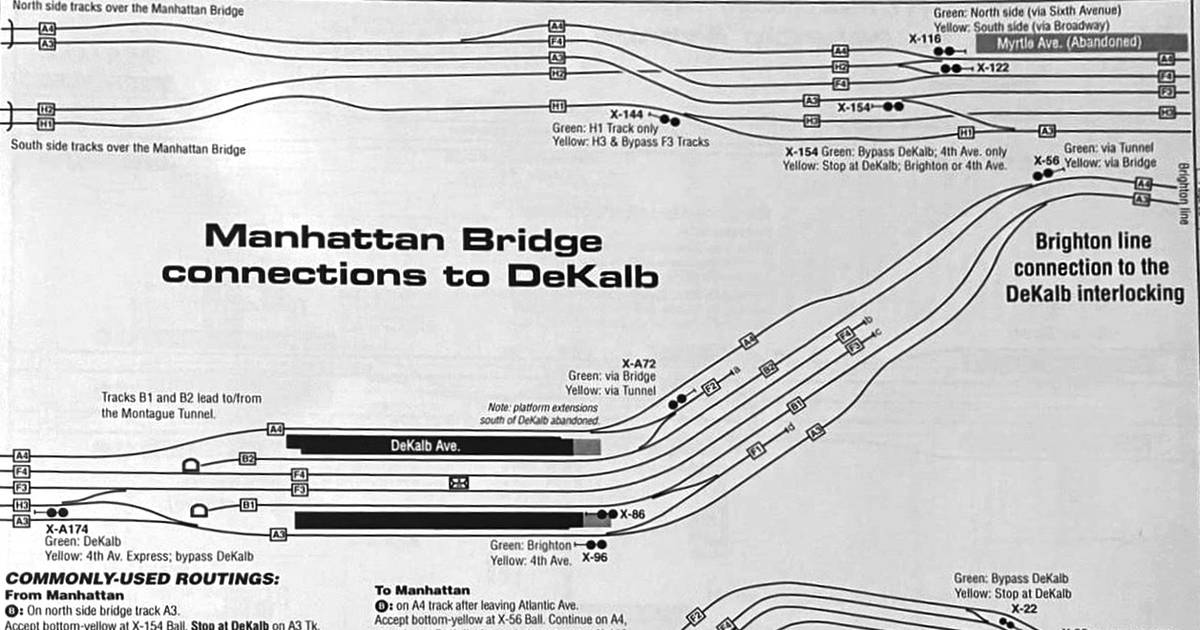 Smart subway riders enjoy the idyllic views of New York Harbor and the East River as they travel over the Manhattan Bridge to Brooklyn — because the next stop on their daily commutes could be several minutes stuck in a tunnel.

Trains on the B and D lines roll in and out of Brooklyn on two tracks on the north side of the bridge, while the N and Q roll on the bridge’s south side.

After they arrive from Manhattan into Brooklyn, Q trains cross through a switch in front of B and D trains. D trains do the same when they are coming from the opposite direction. Often, trains stop to let each other pass.

This is the DeKalb Interlocking, and it’s the most congested part of the city’s 665 miles of subway tracks. The Metropolitan Transportation Authority has no plan on the books to fix it.

“It’s a maze,” said Zach Summer, a train operator and rail buff who’s driven trains on all four lines over the interlocking.

“It’s imperative to know where you’re going,” said Summer. “You have to follow the signs, go through a tight curve. You can be stuck for a while when trains cross in front. And the whole operation runs on 70-year-old technology.”

No computer system guides trains through the bottleneck. And unlike trains on the subways’ numbered lines, workers at the subway’s central rail control center do not know exactly where lettered-line cars are located.

When motormen like Summer drive a train through the interlocking, they must tell an operator in a tower, or control booth, inside the tunnel which train they’re operating and where they are.

The tower operator operates a mechanical system that changes track switches so each train ends up going in the right direction.

Subway crews have orchestrated this delicate dance hundreds of times a day since the 1950s, when the interlocking was last rebuilt.

“They rebuilt it, but if they had computerized the interlocking there wouldn’t be so much sitting around,” said Andrew Lynch, a New York transit activist.

“With new signals, the trains would still have to merge and possibly wait for passing trains, but they wouldn’t have to come to a full stop first, especially when they come off the bridge,” Lynch said. “The computer system would know where the trains are and set up the switches ahead of time.”

MTA officials last month gave an update on the agency’s $7 billion plan to modernize signals that use computers to direct trains — and it did not include upgrades to the B, D, N or Q lines.

So B, D, N and Q riders will continue to be delayed at the interlocking — and they’ll also ride some of the MTA’s oldest subway cars because newer cars have been moved to lines where signal improvements are planned.

Some subway wonks like transit analyst Alon Levy think the MTA should again restructure the lines in a way that avoids switches and crisscrossing would let the MTA speed up trains and run them closer together.

One of Levy’s ideas is to swap the routes of the Q and the D lines in Brooklyn to minimize crisscrossing at the DeKalb interlocking.

MTA officials said they’ve looked into rerouting trains on the lines leading in and out of Brooklyn via the DeKalb Interlocking, but pointed to a survey from the early 2000s that found riders preferred the current map because changes might require some to make an extra transfer .

“There can be better service on this line, but it will be different service, and you wouldn’t have to physically rebuild anything,” said Lynch. “People might have to transfer or walk an extra block in the city, but that may be worth it if you have more frequent and faster trains.”