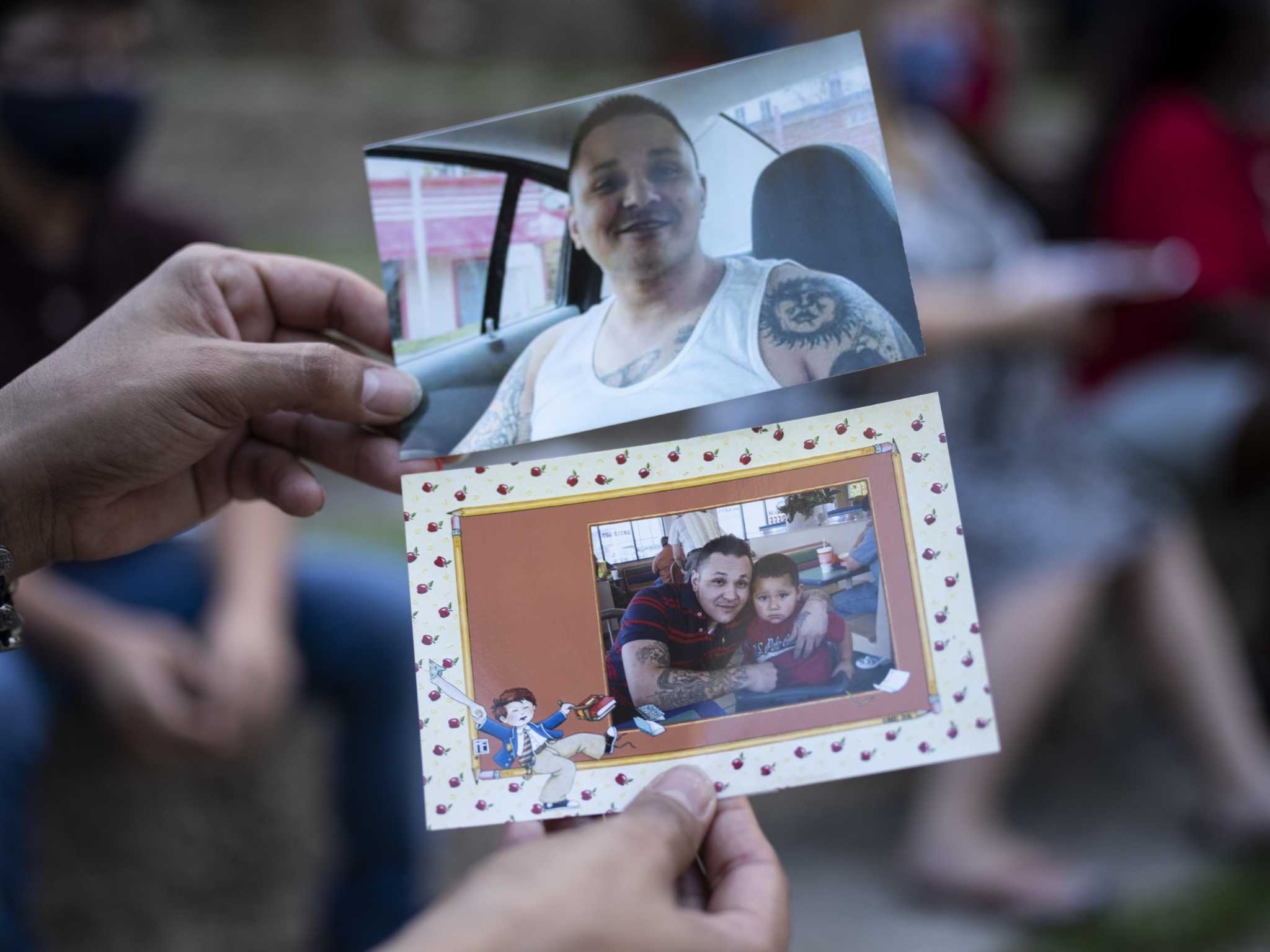 The widow of Jesse Aguirre Sr., who died during an encounter with San Antonio police on a West Side freeway in 2013, has agreed to settle a federal lawsuit over his death.

Court papers filed Wednesday do not disclose the terms of the deal but said the proposal will soon be taken to the City Council.

Cuffed and face down, Aguirre, 37, who had been behaving erratically, died April 12, 2013, with the weight of three San Antonio police officers on him for five-and-a-half minutes along US 90, police cam-dash video of the incident shows.

His lawyers and activists later called it the “George Floyd case” of San Antonio, comparing it to the 2020 Minnesota case in which Floyd was suffocated by the weight of a police officer on his neck.

“On April 12, 2013, the San Antonio Police Department did leave me without a husband and my son without a father,” his widow, Blanca Aguirre, said at a news conference last year. “And. … the officers that were involved do need to be held accountable for what they did. This needs to stop. This is an ongoing thing, and it keeps happening. This needs to come to an end. ”

Messages seeking comment from Aguirre and her lawyers were not returned Wednesday.

City spokeswoman Laura Mayes said she did not have the settlement amount, but the information would be released when it appears on the City Council agenda.

Aguirre ran onto US 90 after arguing with a girlfriend and crashing a car. The officers initially appeared to try to get Aguirre out of the way of highway traffic by cuffing him and flipping him head-first over a concrete median barrier. They then moved him to the hood of a patrol car and soon after put him onto the roadway. Officers said they had to forcibly subdue him because he was resisting.

On ExpressNews.com: Appeals court finds judge wrongly granted qualified immunity to police in 2013 death of man on US 90

The Bexar County medical examiner ruled that Aguirre died from “excited delirium associated with cocaine and ethanol intoxication.” He had a mix of cocaine and alcohol in his system.

Blanca Aguirre’s lawyers claimed the death was from the way police restrained and pinned him down.

The autopsy found several scratches and bruises to Aguirre’s face and hands that were considered minor. The report classified Aguirre’s death as a homicide, but a medical examiner previously clarified in July 2013 that it is not necessarily a legal finding. Anytime a person is touched or restrained by an officer and they die, the death is ruled a homicide per industry standards, the medical examiner said at the time.

The officers were not criminally charged.

The lawsuit filed by his widow appeared at an end years later, when Senior US District Judge David Ezra ruled in favor of the city and five officers.

But in 2021, a panel of the 5th U.S. Circuit Court of Appeals in New Orleans overturned a key part of Ezra’s ruling that had given the officers a win based on the doctrine of qualified immunity, which typically protects police in use-of-force cases. .

The panel, in a divided opinion, disagreed on the facts but agreed on the result: It should be up to a jury to decide whether the officers used excessive force and violated Aguirre’s constitutional rights.

Trial had been scheduled for Monday in Ezra’s court, but it has been canceled, records show.

It is the second lawsuit over police encounters that the city has opted to settle just before trial in the past month. Last week, the City Council approved a $ 450,000 settlement for the family of Antronie Scott, an unarmed Black man who was shot and killed by a San Antonio police officer in 2016. Scott was holding a cell phone that the officer thought of as a gun.

Both settlements came after a $ 10 million verdict a federal jury returned in March for the family of Gilbert Flores during a civil trial for two Bexar County sheriff’s deputies who fatally shot him. Testimony and video showed Flores had his hands up in apparent surrender, but was holding a knife in one of them, when the deputies fired.

In the appeals ruling in the Aguirre case, Justice James Dennis said the dash-cam video shows officer Cristina Gonzales yelling profanities at Aguirre and threatening to shoot him as he walks dangerously close to traffic along the busy highway.

According to an account Dennis summarized in the ruling, officers Jennifer Morgan and Roberto Mendez arrived seconds later. Morgan aimed her gun. Mendez pulled out a Taser. Gonzales caught up with Aguirre and handcuffed him as the other officers helped flip Aguirre over the concrete median and onto the pavement. The officers then put Aguirre’s upper body on the hood of a police car.

A little later, Aguirre – still handcuffed – was moved to the ground face-first and Gonzales pulled his legs up towards his buttocks. Aguirre appeared to cry out as he was held down by the weight of the police officers.

After more than five minutes, Aguirre appears to lie motionless. Officers milled around for three minutes before turning him over and trying to resuscitate him, according to the ruling.

In court filings this week, before the settlement was reached, city lawyers continued disputing how things unfolded, saying Aguirre’s head landed on the foot of officer Morgan, not directly on the blacktop. The city admitted Aguirre was taken to the ground and placed there with his hands handcuffed behind his back, but dispute that the officers took Aguirre’s life.

Defendants admit Officer (Bettina) Arredondo at one point noticed Mr. Aguirre’s lips had turned blue, but believed it was drug-related based on her past experience and therefore did not communicate that to the other officers on the scene, ”said a city document responding to the latest version of the lawsuit.

The city also argued “that if Mr. Aguirre underwent any mental or physical pain or suffering prior to his death such is due solely to the illegal substances ingested by Mr. Aguirre and / or wholly disassociated with the allegations upon which this lawsuit is predicated. ”

The city’s lawyers further argued that Aguirre’s widow is not entitled to recover more than $ 600 for Aguirre’s funeral expenses because his mother and family paid most of them.