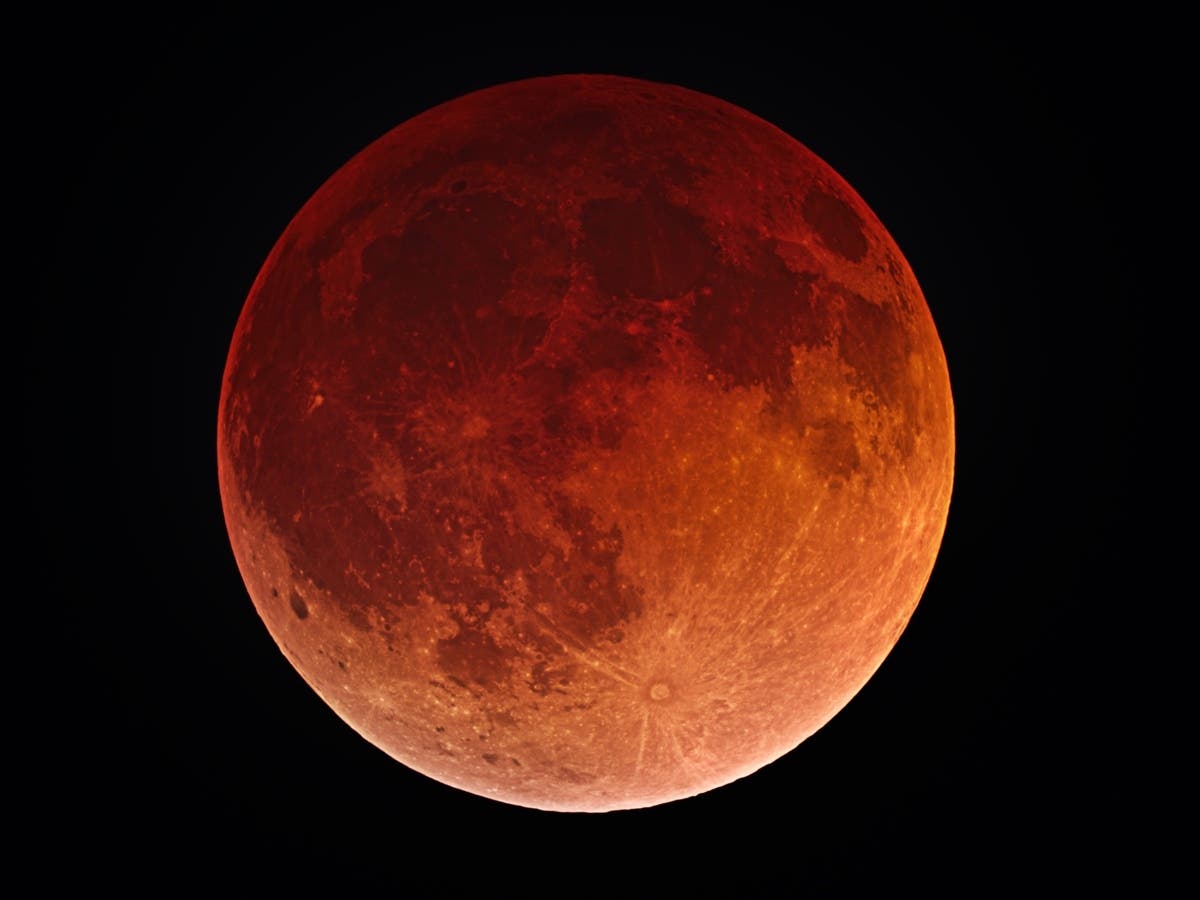 SOUTHERN CALIFORNIA — The first of two total lunar eclipses visible to SoCal residents this year occurs Sunday and Monday and will turn May’s full flower moon blood red. Oh, and it’s also a supermoon — depending on whom you ask.

Whether you’ll be able to see the lunar eclipse, of course, depends on the weather. Accuweather predicts cloud cover as high as 60% in Southern California’s coastal areas, which would badly impact visibility. In urban areas further inland, cloud coverage of around 40% is expected. The best bet for visibility will be in Riverside County, where cloud cover is only expected at around 25%.

On Sunday night, AccuWeather predicts 26% cloud cover over Murietta and Banning, 32% over North Hollywood, 34% over Beverly Hills, 43% over Santa Monica, 42% over Irvine, 45% over Los Angeles, and 60% over Malibu, Newport Beach and San Diego.

To guarantee the best view, head out to uncrowded inland areas away from city lights, like Joshua Tree, Mt. Jacinto State Park, or the Margarita Lookout Tower in Fallbrook. If you’re unable to make it outside, Griffith Observatory in Griffith Park will livestream all phases of the eclipse, weather permitting.

In Redondo Beach, the Portofino Hotel and Marina is hosting a 90-minute kayak tour Sunday night led by REI guides at its Dockside Marina. The aptly-titled “Dockside of the Moon” costs $175.

Not everyone will see all three stages of the lunar eclipse. People living in the eastern half of the country and all of South America will see every stage of the lunar eclipse, according to NASA. People in other parts of the United States will see totality but will miss other phases.

Here’s what to expect in Southern California:

Moonrise is around 7:50 pm PDT Sunday in Los Angeles. It’s worth taking a look because, 1) rising full moons are pretty and 2) some celestial experts call it a supermoon (a bit more about that later).

The partial eclipse starts at around 7:27 pm PDT. The face of the moon will get gradually darker until totality peaks at 12:12 am Monday. Totality will last about 1 hour and 25 minutes, and the eclipse is over at 1:55 am The moon will continue to shine until dawn, setting at 6:08 am

Lunar eclipses only happen during a full moon, when the moon is opposite the sun in its orbit of Earth. In a full moon, the sun fully illuminates the face of the moon. During an eclipse, the entire moon enters the darkest part of Earth’s shadow.

“Blood moon” is a descriptive rather than technical astronomical term, though The Old Farmer’s Almanac says the phrase is “hyped” and that a fully eclipsed moon is orange, or copper-colored like a penny, but not blood red. The moon’s color at totality can also vary depending upon the amount of dust, volcanic ash or other particulate matter in the atmosphere, and because of cloud cover, according to Space.com.

Weather permitting, the lunar eclipse is worth staying up late to watch, even if it isn’t a supermoon.

“Supermoon” isn’t an astronomical term either, but rather one coined by astrologer Richard Nolle, who calls a full or new moon a supermoon when it is at 90 percent of its closest point, or perigee, to Earth. Under Nolle’s definition, four full moons meet supermoon criteria: a new or “stealth” moon on Jan. 14, full moons on June 14 and July 13, and a new moon on Dec. 23.

However, Fred Espenak, a retired NASA astrophysicist who worked at the Goddard Space Flight Center, uses slightly different criteria. He says the May flower moon is the first of four supermoons in 2022. He also counts the June 14 and July 13 full moons as supermoons. Unlike Nolle, Espenak says the Aug. 12 full moon will be a supermoon (bad news for Perseids meteor shower fans, because the supermoon and the peak of the summertime favorite coincide).

Either way, a supermoon isn’t bigger, and it doesn’t even look that much bigger in the sky when compared to a normal full moon. While it can look larger when it’s close to the horizon, that’s due to “the circuitry in your brain,” according to Universe Today which explained “it’s an optical illusion … so well known that it has its own name: Moon illusion.”

Although most often called the full flower moon, the May full moon is also known as the corn planting moon and the milk moon in the United States. In Asia, it is known as the Vesak Festival Moon because it corresponds with Buddha Jayanti or Buddha Purnima, a Buddhist holiday that marks the birth, enlightenment and death of Gautama Buddha.

The actual date of the Vesak festival depends on the calendar used in different countries and regions, but generally falls on or near the day of the May full moon.

If you miss the eclipse this month, the second 2022 total lunar eclipse on Nov. 8 will be visible across the Americas, Oceania and Asia.